After years of service to the Rover Branch of the South African Scouting Movement Gerard Evans has stepped down. Cameron Belling was recently appointed as National Chair: Rover Programme. We spoke to him and found a young man with a passion for adventure, for the camaraderie Scouting brings and mostly for Rovering! 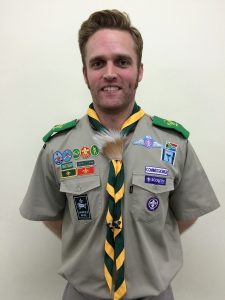 Cameron is no stranger in KZN Scouting circles as he joined the Scouting Movement in Durban in 1998 as a Cub. Six months later he moved up to Scouts at the 4th Durban St Thomas Scout Group and has been actively involved ever since. When asked why Scouting is so special he replies with a smile “I think SCOUTS South Africa is one of the very few organizations that has something for everyone no matter who you are or what your capabilities are. Scouting gives you the opportunity to pick your areas of interest and better yourself in them, more than that it allows you to pass this knowledge on to others. I think Scouting looks beyond your age when it comes to learning as you can learn something new from the smallest Cub in a Pack, it’s not only learning from the older generation but from the new youth coming through as well.”

Cameron grew through the ranks within 4th Durban St Thomas, from Assistant Patrol Leader right up to Assistant Troop Scouter. In 2006 he was invested as a Rover after which he took up the role of Crew Chairperson. He then moved to the SIGMA Rover Crew and in 2010 was appointed Rover Scouter. “When I think back on my Scouting journey I have so many great memories but Sanjamb would be a big one for me, particularly as it was the last one that has been run in a number of years. Sanjamb was one huge jamboree camp and involved meeting Scouts from all over South Africa and participating in extreme and fun activities,” he reminisces. “Next would be the Senior Scout Adventure in the Cederberg. I had the rare opportunity of attending it twice as a participant. I would encourage any Scout and Rover to attend this event at least once in their Scouting career!”

On a Regional Level Cameron has also volunteered his expertise in a number of roles ranging from KZN RAC Chairman to RTC Rovers. The KZN training team appointed Cameron as an Assistant Leader Trainer in 2013 and two years later he was appointed Leader Trainer. “Most of the life skills Scouting has taught me I apply in my own daily life. You can always spot a Scout in a group of people. They are the ones that are organized and keep the group together no matter what the situation.”

Cameron achieved many accolades throughout his Scouting career, some of which are his Springbok in 2005, a Scout Woodbadge in 2006, a BP Award in 2012, a Provincial Commissioner’s Commendation in 2014, the Leader Trainer Charge in 2015 as well as the Rover Woodbadge. Obtaining two Woodbadges before his 30th birthday is a feat he is very proud of.

Earlier this year Cameron took on the role of Contingent Leader for the 15th World Scout Moot taking place in Iceland next year. “I’m really looking forward to the National Moot! We hope to get a great contingent ready to make new memories and represent SCOUTS South Africa. More details available on www,scouts.org.za

When not Scouting Cameron is also thriving in his professional career. He started as a freelance designer and currently heads up the national marketing department for an industrial manufacturing company. “It’s a bit of a change from doing the design work but have found my true passion has grown from creative to strategy.”

Despite his professional career taking flight and his busy Rovering schedule, Cameron, who has adventure and courage running through his veins, took up another position within SCOUTS South Africa as National Chair: Rover Programme. We are looking forward to seeing Rovering flourish under his care! 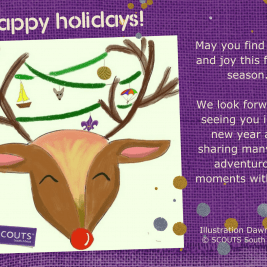