Yoh, but it’s lekker to be back at Kon-Tiki, né!? This year is gonna be tight, my bru! For the 39th time the Cape Kon-Tiki will be bringing together thousands of children, youth and Scouting enthusiast! From the 24th till the 26th of March teens under 18 years old will compete to build the best raft, to make the best three course meal on water and will compete in on-land challenges at the Zandvlei Sea Scout Base in Muizenberg.

“This time around we have opted to go 100% local, which is totally hundreds!,” explains event organizer Robbie Owen “Every year the teams need to decorate their rafts as per the annual theme. In |Xam, the words of the South African motto on our coat of arms reads “ǃke e: ǀxarra ǁke”, which means “Diverse People Unite”. Scouts and Guides will unite at the 39th Cape Kon-Tiki event under “Local is Lekker” to demonstrate the beautiful spirit of what it means to be a part of this magnificent country. So when it comes to inspiration anything goes! From beadwork to rugby, from wildlife to taxi’s! Inspiration is everywhere, and it’s vibrant just like South Africa!”

Scouts and Guides will have 13 hours to build a raft 6m x 4m big, using gum poles, 15 barrels and rope. No screws, nails, cable ties, etc. are allowed – everything must be tied together. On top they need to build a kitchen, separate bathroom and sleeping quarters for 6 people. If there are boys and girls on the raft there need to be two bedrooms. The rafts will be launched on the vlei on Saturday and while on the water for 24 hours the teens need to cook a 3 course meal which the judges will sample, and complete 7 Spare Time Activities, which include a pioneering project, craft project and a spectator challenge!

The Cubs, Scouts and parents on shore take part in the Fringe competitions. They will include tackling an obstacle course, volleyball, tug-of-war, a kneeboard race, cross country running and of course a potjie competition! This year we have a bumper entry of 31 rafts and 47 fringe teams, with a total of over 650 scouts, guides and ranger guides taking part. Once again we expect around 3000 spectators. 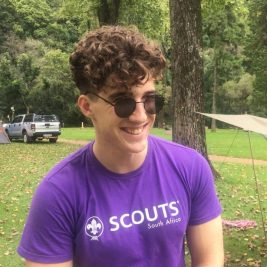