With youth month in full swing SCOUTS SA would like to highlight some of the great initiatives youth in the Scouting Movement have been taking to support others. One such project, led by Scouts from 1st Monte Vista, 2nd Somerset West, 2nd Kenridge and 2nd Bergvliet Scout Groups, was the project in support of Die Bron Primary School in the rural town of Stanford in the Western Cape. 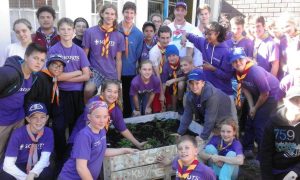 The youths decided to assist Die Bron Primary School with the growth of additional vegetables and herbs, the planting of trees and the building of a sand pit and a swing set for the 475 learners that attend the school daily.

Die Bron Primary School was established in 1939 and is one of two government schools in the rural town of Stanford (about 120 km from Cape Town). The school is a multicultural and multi-grade school with grades 4-5 together and 6-7 together. There are 475 students with 20 staff members. The majority of the learners’ parents are illiterate and there is a high unemployment rate resulting in the children coming from extremely poor backgrounds. To provide the children with a healthy lunch, the school forms part of a government feeding scheme. However, in order to make the meals more interesting and nutritious, the principal expressed the need to have a garden on the premises to grow herbs and vegetables for the daily lunches. When the Scouts heard of their need, they leaped into action as part of the 100 ECD initiatives undertaken to mark the Cub Centenary.

The food box project incorporated the building of three food boxes, making 100 seed packs that children took home and the planting of various herbs. The Scouts built three food boxes which were 3m by 1m wooden troughs that were fixed into the ground. These troughs were filled with nutrient rich soil and then the Scouts planted an assortment of vegetables such as carrots, onions, beans, cabbages, lettuce and kale. The Scouts also planted various herbs such as mint, rosemary and thyme. Once harvested, the veggies and herbs are being used in some of the school lunches. The Scouts then made 100 seed bundles – which consisted of a packet of seeds and a booklet with planting instructions. 100 children from the school were given these ‘seed packs’ to start their very own gardens at home. To encourage the scholars to grow vegetables at home and provide for their families, the school was given 100 ‘Food For Life booklets’.

Not only were the children given access to more nutritious food, but the Scouts, who value the aspect of play, cleared the playground of rocks and stones to make it safer for the learners to enjoy. They also established a sandpit and a swing set for the younger children at the school.  Lastly, to ensure that future learners could rest in the shade at break time, a number of indigenous trees were planted on the property.

This project brought smiles to the faces of the principal, the learners and the Scouts and echoed the importance and value of community service. 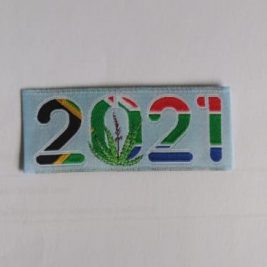