In a digital world children and youth often spend their time glued to their screens through which they chat with friends. Scouting offers young people the opportunity to step out of their digital world and get active outdoors. At 17 years old, our Scouting members have learnt how to be leaders, how to work in a team, how to set up camp and survive in the outdoors. All it took was for them to get up and learn by doing! 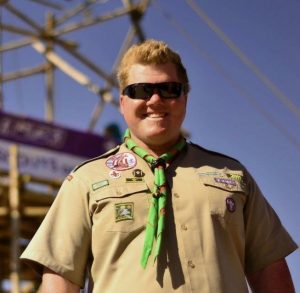 To showcase this methodology, Scouts from all around Johannesburg got together to build a billboard in the PWC Bike park in Bryanston in partnership with DDB SA. We spoke to Ryan De Jager, Randburg Scouting District Commissioner, about Scouting, about the project and about learning by doing.

Ryan started his Scouting journey with the Mafikeng Scout Group at the age of six as a Cub. In 1994 his family moved to Johannesburg where he continued Scouting with the Veldskoen Cub Pack, now known as the Robin Hills Scout Group. Twenty-seven years later, at age 33, Ryan is still an integral member of the Scouting family! So what has kept him in Scouting for all these years? “Scouting has become a lifestyle.  I have had the opportunity to meet and work with amazing people, I even had the fortune of meeting my now wife at a Scout camp. I love the fact that we get the opportunity to do things we would otherwise not be able to do. I feel that I had a great opportunity to become a better person through Scouts and feel it’s my duty to give back to the youth.”

“When I think back I have so many fond memories. Every Scout camp and hike I’ve attended all bring back such amazing memories. Achieving my Springbok Scout and Wood badge were also great moments. I had the opportunity to visit South America for a World Jamboree and hiking in the Cederberg Mountains was amazing!” he gushes. 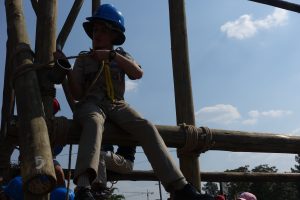 The new Scouting awareness campaign highlights the Scouting methodology of “Learning by Doing”. We asked Ryan to name a few skills he learnt through Scouting that help him daily. “Scouting has given me so much. Every day I use the leadership skills, communication skills, problem solving, team work, delegation and planning skills I learnt. Scouting teaches you to think out of the box all the time. Scouts approach obstacles and problems from a totally different mind-set. We are taught to plan and execute our plans flawlessly.” 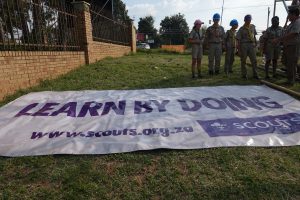 So how did the build of the billboard unfold? “We arrived at the site with a lot of excitement and anxiousness. The Scouts new they were building a billboard but other than that had no idea what they were in for. The build started off slow as we had to cut and whip our ropes before we could start pioneering. Once done, the Scouts had to get used to the fact that there was a lot of filming going on around them. As you would expect, they got stuck in wherever they could tying lashings. Because of this the structure went up at a good pace. It was great to see Scouts from different Groups coming together and enjoying a day of pioneering, My fondest moment of the day was the reveal of the actual artwork for the billboard, you could feel the excitement and pride in the air after that moment! I hope the billboard draws attention to the fact that Scouts are still active in South Africa and I hope that the slogan “Learn by Doing” draws attention from the people passing by and ignites curiosity within them.”

Ryan travels a lot in his professional capacity and often passes by the billboard “Every time I drive past that billboard I feel a sense of pride. I also feel a sense of gratitude to the Scout movement for allowing me to be part of something so awesome. It’s an even better feeling when friends have driven past the billboard and phoned you asking if you’ve seen the new Scouts billboard…and you can tell them you were part of the construction.” 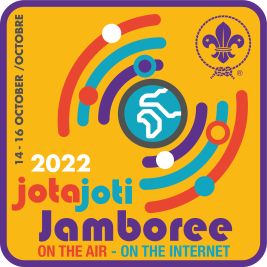