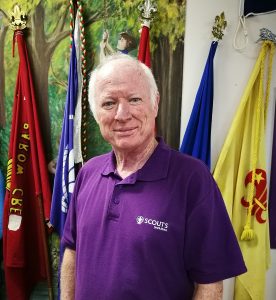 Stuart Ravenscroft manages the Western Cape Scout Heritage center in Goodwood. He recently joined the Alumni Network and so we met up with him for a cup of tea and to find out why our Scouting heritage has such an important place in his heart.

Stuart joined Scouting as an adult 34 years ago when his neighbour asked him to come to a meeting. “I was a mountaineer and an outdoors man and my neighbour asked if I could help to test the older Cubs on lighting a fire and making a cup of tea. I immediately grasped the ‘bigger picture’ and thought this would be something worthwhile to get involved in. I joined 1st Edgemead as an Assistant Pack Scouter and my son became a Cub. It was extremely rewarding to see how the aims and methods of the movement influenced the children for the better. The children enjoyed the outdoor activities and camping, they made good memories and had fun. That has always been a big part of my life and I loved that I could experience that in Scouting too. As my son grew older, I switched with him to the Scout Troop and eventually became the Troop Scouter and later Group Scouter,” explains Stuart with a smile. 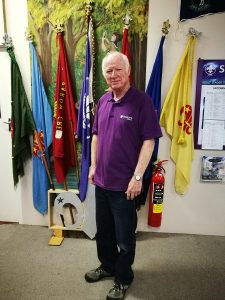 Stuart stayed with 1st Edgemead for a good few years before serving as the District Scouter. “Wherever I was needed, I would happily help out” he says cheerfully. This also included volunteering for the biennial Senior Scout Adventure in the Cederberg Mountains. “Seeing the camaraderie and excitement of the Scouts will always be one of the most wonderful experiences in Scouting!” As an adult volunteer Stuart received one of the highest Scouting awards in South Africa, the Order of the Silver Protea. “It is nice for me to know that one’s work is truly recognised and appreciated. I was very honoured.”

Professionally, Stuart used to work in IT security relating to documentation management, but he also possessed some ‘handyman’ skills and had access to corporate funding. “From the mid 1980’s to the mid 1990’s I took over the running of the Western Cape Scout Campsite Hawequas. I took part in building the big dam that many Scouts use now.” In 2007 Stuart retired and took on the task to restructure and manage the Western Cape Scouting heritage. “When I was involved in the day to day activities of the Scouts, the most important thing was the contribution that Scouting made to their lives. Today my focus is on preserving, and making people aware of, our rich Scouting Heritage.”

The Western Cape Scout Heritage center consists of a library, a museum, exhibits, archives and an online heritage page. The archives and website catalogue the vast amount of documentation and memorabilia as well as lists and stories of the many activities and events that Scouts and Scouters have attended. “It is very important to preserve the South African Scouting Heritage,” explains Stuart. “As our Heritage center motto states we are Honouring the Past, Inspiring the Future and Building a Legacy. If our current Scouting members can appreciate, that what they are doing now, has been experienced by many Scouts before them, they can see how Scouting has influenced the lives of generations of people like themselves and can learn from the experiences of former Scouts. In this regard, the presentation of our heritage is also very important to inspire children visiting our centre here in Goodwood. Enthusiasm builds enthusiasm and we need that!”

Stuart has now joined the Alumni Network. “I want to encourage my fellow alumni network members to donate their memorabilia to the Heritage center, so that nothing will be lost.” Despite his love for heritage Stuart loves the fact the Scouting movement is continuously evolving “Today a lot of things have improved in SSA, there is a far greater openness and much improved communications. Girls in Scouting was also a big positive change that brought us more members and embracing the fact that Scouting is a worldwide movement by adopting the international brand lets people know that we do move with the times.”

I was challenged to overcome my insecurities
Read More
Scouts Wiki