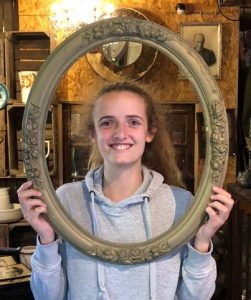 Adventurous and positive minded Jana Lorenz is one of two volunteers from Germany that recently joined the National Office team for a year.

SSA: Jana, can you please tell us a bit more about yourself?
Jana: Sure, let’s start with some general facts. My name is Jana Lorenz, I’m 18 years old and come from a small village called “Uedorf”, placed between Cologne and Bonn next to the river “Rhein”. I live with my parents (Monika and Michael), have a younger sister called Sophie who is 16 years old and together with my cat Siyah our little family is complete. My family is very passionate about Scouting. We are all part of our Scout group called “St. Franziskus Hersel-Widdig”. Another hobby I share with my father and sister is Karate. I also love drawing, reading and hiking in the mountains.

SSA: When and why did you join the Scouting Movement?
Jana: I joined the Scouting Movement in 2012. It was actually my sister who was the first Scout in our family, then my parents joined in and because of them I got to know all the great things you do when you are a Scout and so I also wanted to join in. In my opinion, the thing that makes Scouting special is the respect every member shows towards human beings, nature and religion. This also includes the idea of treating every other Scout – no matter where they live or who they are – like a brother/sister. 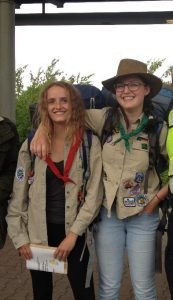 SSA: What are some of your favorite Scouting memories?
Jana: One of my favorite Scouting memories is the “Jamb de Cologne” 2016. It’s a regional jamboree with about 2000 Scouts. I joined this jamboree as a Rover with my best friend Soso. In Germany you can already be a Rover by the age of 16. There were different camps in a row along the river “Rhein” and the Rover-camp was the last of them all. We had a lot of fun, met fantastic people and made new friends. The only thing we didn’t have was food. There was a caterer cooking for the whole jamboree-camp, but he misjudged the amount of food he had to cook and because of the fact the Rover-camp was the last one in the row, the camps before us got all the food and there was just a little bit left when they reached us, definitely not enough to feed a crowd of hungry Rovers. So, we cooked our own, and I think … it was a great meal!

SSA: You have now joined the SSA team in Cape Town. Why did you decide to volunteer for a year?
Jana: A year is a long time and it was not easy to say goodbye. But I wanted to have the experience of really living in another country and culture, not just being a guest. In 2015 I spent three months in La Réunion. It took me two and a half months to find new friends, learn the language well enough to have a real conversation and to figure out the basics of the culture. And after that, I just had two weeks left before I had to fly back home. This experience taught me, that you need time to settle in a new area. You need time to get to know the people, the culture, the language, the city you’re living in and all those other new things. That’s the reason why I wanted to volunteer for a year.

SSA:You mentioned that you have been dreaming of coming to Africa since you were a child. What is it about Africa that is so special to you?
Jana: Maybe I could say it’s the various nature with all those amazing animals and the sunny weather. But I’m also fascinated by the different cultures and the way people live and think here because it differs so much from the way I live in Germany. My German Scout organisation (DPSG) sends three people per year to Africa. I’m really happy that I’ve been accepted to work in Cape Town because I love the combination of the mountains and the sea. There are so many different things you can do like hiking, surfing, diving…. In addition, it’s amazing living in such a big city and have so much nature at the same time.

SSA: What are you looking forward to?
Jana: I’m looking forward to meeting a lot of nice and friendly people and improving my English-skills. I’m also looking forward to experiencing moments I didn’t expect and to enjoy them. I also really want to sail and hike! I want to hit Table Mountain and Lions Head and maybe some other routes. It would also be nice to try out surfing. We are also planning on joining the Rover Moot in Johannesburg and maybe travel and visit the 3rd volunteer from Germany, Dominik, in Mpumalanga.

SSA: You recently took part in the Gordon’s Shield competition. What was that like?
Jana: The Gordon’s Shield competition was actually the first Scouting-competition I took part of because there are nearly no Scouting-competitions in Germany. It was really great!!! I’m so impressed by all those Groups creating their own camp and doing all those STA’s and other tasks in between. It was also awesome to meet and chat to some other Scouts. It was our first feel of Scouting here in South Africa.

SSA: What is the one thing people should know about you here in SA?
Jana: I’m a really positive-minded person. There is always a reason to be happy, and I’m doing my best to find every single one! They should also know that I’m always a bit shy and nervous when I get to know new people. I also might be running out of my English words when I don’t talk much. 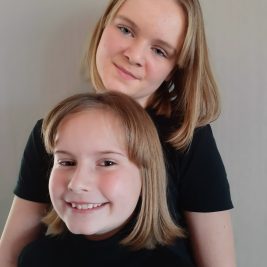