Children from Gugulethu don’t often get opportunities to spend a weekend camping outdoors with friends in a safe environment. We met up with the Western Cape Scouting in Schools (SIS) team at a holiday camp in Grassy Park, Cape Town. The camp bases covered a variety of skills ranging from using an axe safely, to building a suspension bridge, First Aid and practicing their knotting skills. Whilst their peers were eagerly moving from base to base with their Patrols, we chatted to Garret Dyantyi (15) and Lathitha Qolombeni (12). 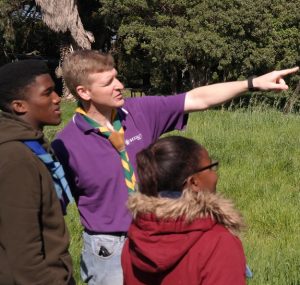 Garret Dyantyi is a soft spoken lad who is the Springbok Patrol Leader in his Fezeka High School Troop. When asked why he joined Scouting, he smiles and says “I love Scouting! My older brother Bonsile Dyantyi was with 1st Ikwezi, as was I. He taught me the Promise and some of the knots so I was able to advance quicker. I was very sad when I had to quit because it was too dangerous for me to go to Scouts. There are a lot of gangs where I stay and it was not safe for me to walk to the Scout Hall. When they started Scouting at Fezeka High School last year I was so excited because it was now safe for me to come back and be a Scout. It is also nice with the interns as they are closer to your age and can explain things in a way we can understand.”

The Scouting in Schools interns are unemployed local youth who have been trained and receive mentorship from the Western Cape Regional Scout team, to lead the Scout Groups in schools. 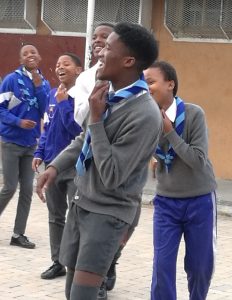 “At Scouting we have fun, go on outings and learn new skills. I am really proud to be a Scout!” continues Garret. “I am improving myself as a person and spend time outside without technology. I make a lot of new friends, learn how to talk to people and respect others. I now also have discipline which will help me to become a chartered accountant one day. Before I joined Scouting I lost my temper often, now I have learnt to be more patient. Recently I was able to use my first aid skills in my community when somebody hurt themselves. I knew what to do. I called for help and did first aid. It felt really good to help somebody. Helping others helps your spirit to be free!” I find Lathitha Qolombeni eagerly participating at the First Aid base. “I joined Scouting in June of 2017”, she explains. “I love it so much. The Scouters teach me so many things. I am not good with talking to people I don’t really know, but in Scouting I have learnt how to meet and talk to people. I know how to control my feelings when I am nervous and to finish what I need to do.”

“When Scouting started at Mvula Primary School, the principal said that everybody who was interested in Scouting should come to the assembly hall. I wanted to do something new and not only go home after school. I told my friends to come too but they wanted to go home or hang in the street with their friends. When they heard how much fun I was having they became Scouts too. It’s so nice to do this together. My favourite part was the camp we did in June where we had a camp fire and sang songs. My friends and I love to sing and make our own songs. It was really fun. My next Scouting dream would be to go on a hike. I’ve never done that before.” 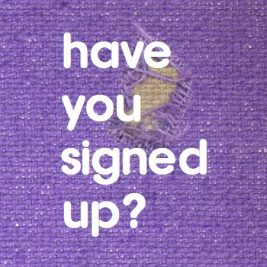