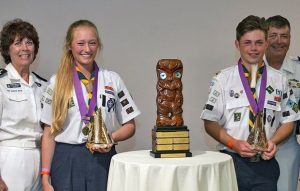 The fun of Scouting is adventure, learning new things and getting to know fantastic new people.
Devan Garland (17 years old) and Che-vonne Mare (19 years old), both members of the Florida Lake Sea Scout Group in Gauteng, experienced all of this and more, when they qualified to participate in an international sailing competition in America, the William I Koch International Sea Scout Cup 2018. What they didn’t expect was to win a top position, the third place of the Kiwi Trophy!

“The Koch Cup is the fleet with the top qualifying teams and then the Kiwi Cup is a concurrent competition for the rest of the participants.” they explain. “So what happens is on the second day they hold the qualifying races. At this event there were 32 teams. The teams initially get broken up into 2 different fleets of 16 teams each, the teams of each different fleet then compete against each other during the qualifying races. After the qualifying races the top 8 of each fleet are chosen to form part of the Koch fleet and the bottom 8 form part of the Kiwi fleet. We unfortunately missed out on the Koch fleet by one point”, says Che-vonne.

However, even though they were not in the Koch fleet just because of this single point, Devan and Che-vonne were very excited on placing 3rd in the Kiwi Trophy!  “It was a great feeling to know that we had given it our best and had achieved something by doing so, it was absolutely fantastic.” Che-vonne remembers. Devan agrees and adds”I had decided that I would do my best, but wasn’t going to take it too seriously. I was going to have fun while we sailed and we did! There was plenty of banter between the teams out on the water.”

Sea Scouts practice a lot of water activities, so Devan and Che-vonne got familiar with sailing very early. However, it took them a while to discover their passion for this sport.

Devan joined the Florida Lake Sea Scouts (FLSS) in 2012, after finishing his Leaping Wolf at the Bushhill Scout Group. “I had a really good family friend who was a “Sea Scout” at FLSS. He was like a big brother to me, and the more he spoke about the awesome activities he did, the more I knew I wanted to be a Sea Scout.”
“Sailing wasn’t always special for me,” explains Devan. “Out of all the water activities we do as Sea Scouts, sailing was way down at the bottom of my list. I was terrified of capsizing! But, with the awesome support from our Troop Scouter back then Martin White and senior Scouts, Vaughn Mare, Sabin Willson and Jarrod Willson, I learnt how to sail and read the wind, my confidence grew and so did my love for sailing”, he says with a smile.

Che-vonne joined the Florida Lake Sea Scouts one year before him because of her older brother, who also was a member of this Troop. “My brother competed in the Koch Cup in 2012,” says Che-vonne. “Devan had been the one to qualify for this event, and since we had sailed well together in previous years he asked if I would join as his crew. We had sailed together many times before and understood each other very well.”
“FLSS has had quite a few members qualifying for this competition. Vaughn and Sabin qualified to sail at the William I Koch Cup the year I joined FLSS, then in 2014 Nicolas and Connor also represented us there and so I was determined to work hard so I could also represent my Troop and SCOUTS SA.” adds Devan.

For both of them, it was their first really big competition as well as their first time in America. “I must admit, I expected America to be very different, the people specifically.” Che-vonne says. “I expected them all to be fairly unfriendly and even slightly rude, however I was very pleasantly surprised when everyone was incredibly welcoming and so friendly. The whole competition itself was quite the learning curve which I feel was a great experience!”. “The highlights for me were meeting Scouts from around the world, making lifelong friends, and making memories.” continues Devan. “The Brazil team gave me their scarf and a badge and told me they would be waiting for me in Brazil if I do the Cape to Rio next year 2019! It was amazing, we really had a great time!”

As with all big adventures the two sailors also had a few challenges to overcome. “Our biggest challenge throughout the competition was the wind, there was very little wind the whole week while we were there. Some races were even cancelled due to the lack of wind. And then we also had a boat taking on water, which cost us a few points in the qualifying races.”” reminisces Che-vonne. ”

When asked what advice they have for other Sea Scouts in SA, who dream of sailing in international competitions, Che-vonne answered “you need to know your sailing well, practise as much as possible and be prepared for all different types of conditions. One year it could be incredibly gusty and the next there could be very little wind, one doesn’t know what to expect. If one is thinking about going, go over to enjoy the experience as well!” Devan concludes: “I would tell them to not take it too seriously, enjoy the experience and have fun, make memories with great Scouts.” 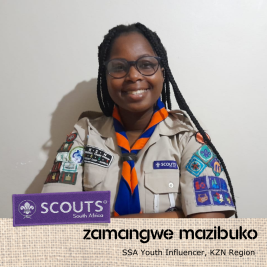