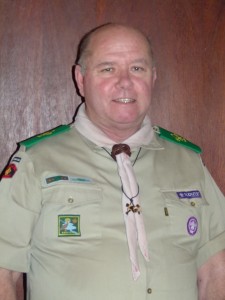 It is with great sadness that we announce the passing of Andrew Hall. Andrew served on the National SSA team as Chair: National Adult Resources from April 2014 up to May 2018, after which he took up the role of RTC Adult Leader training in the Western Cape.  Previously he was the leader of the Gauteng training team for a number of years, the Rover Scouter for the Phoenix Rover crew, DC for Benoni,  Group Scouter, Troop Scouter and Assistant Troop Scouter at 9th Benoni in Gauteng.

Andrew passed away on Thursday after bravely battling chronic liver problems and related complications, for a number of months. We fondly remember Andrew for his commitment to the Scouting Movement, his Scout Troop, Rover Crew, District training and the National team.

He was always ready to travel to meet fellow Scouters and give wise words of advice. He led by example and continuously strived to do his best in order to leave this world a better place than how he found it.

Our sincerest condolences go to his wife Jane, son Nick, daughter Rebecca and their families.

You are all in our thoughts and prayers.