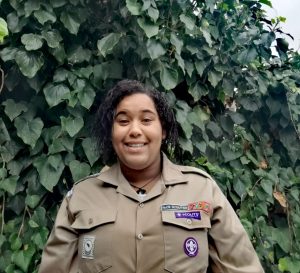 Ruth Wise lives with her mother and two sisters in Retreat in Cape Town. In 2017 she joined the Scouting in Schools programme as an intern in the Western Cape. “I knew about Scouts, but I always thought it was for rich people so I never considered joining,” she explains. “In January 2017 a friend told me about an internship called “Scouting in Schools” (SiS) that she had found on Facebook. We both rather spontaneously decided to apply for it. It didn’t take long before my opinion of Scouting changed completely and I had learned how to run programmes in schools myself. I saw that you don’t really need anything to be part of Scouts. One of the Scout Laws says “a Scout is thrifty”, so you do things with what you have. And that’s what we did most of the time. It’s where I realised that Scouts isn’t just for rich people and you don’t need any money to be part of Scouts. I also realised that Scouting is more than just building fires, it teaches life skills.” 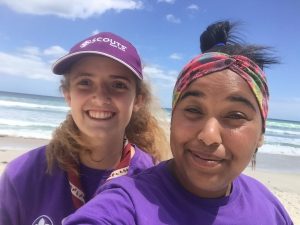 “The SIS programme has also helped me grow in all areas of in my life,” says Ruth confidently. “I am more confident when I speak in public, I can communicate more easily, I can work with budgets and I’ve met many amazing people and made lifelong friends. I have also learned about time management and its importance. That was actually the biggest challenge for me as a SIS intern. I was always late and never on time for anything. Because of this I missed many opportunities, like judging in Scout competitions, taking part in those competitions and going sailing. After I missed the opportunity to go sailing I realised that no one is going to wait for me and I had to make a change. So I started setting my watch ahead of time, until it was no longer necessary. But I still struggle with time. It’s not always simple. I still come late to work or I’m still late for certain events, but I think that’s something that everybody struggles with. We all struggle with time sometimes!” she says with a smile.

There are many Scouting moments Ruth cherishes, but there is one that stands out. “My proudest moment was in 2017. We were running a SIS programme with some of the learner in a local school and the principal told me that there was a big change in the SIS learners’ behaviour. He said they were no longer fighting and that they were more focused in class and had started greeting staff. It made me proud knowing that I was able to teach learners valuable lessons.” 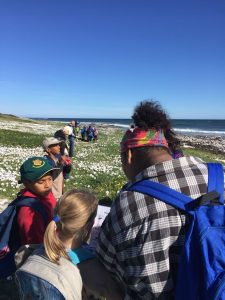 The SIS programme for interns lasts one year. After Ruth’s time as an intern ended she was employed by the Western Cape Scouting Region to administer it. “I was really happy!” Ruth says. “I wasn’t ready to leave the SIS programme as there was so much I was learning. I didn’t want to stop. Being the administrator of this programme has its own challenges, but my growth hasn’t stopped and I have many mentors at the National Scout Office that support me and always push me to not give up. Even though I’m still involved in the programme, I must admit that I miss interacting with the school children. I loved working with those kids and being a positive role model for them. We never had after school programmes when I was at school. We only had sports and I was always chubby and didn’t take part in sports. I miss running programmes and being there for kids that are not strong academically or physically.” she reminisces.

The new SIS programme recently started and a new team of interns have joined Scouting. Ruth is excited as she know the life changing impact that this will have on their lives. “Most young people are very confused when they leave school. I was the same. It’s very difficult because when you are 18 you don’t know what you want to do. There are so many opportunities, you can go to work or start to study. Most young people get comfortable with working and getting money and don’t study. They are missing out on any other opportunity. The internship teaches you skills and opens up a lot of opportunities as it also builds your CV. I would really advise the new interns to grab any opportunity they can get and not to let anything stop their growth. They should also make as many friends as they can and use this programme to grow and to build their network.”

In addition to working for the SIS programme, Ruth is the Pack Scouter for the 1st Meadowridge Scout Group and is getting ready for her next adventure as she will be a mom soon. “My child will definitely be joining the Scouts one day!” she quips. “ Like I said, I always thought that Scouts was for rich people and my perception of this has changed over the past few years. I feel that every child should be part of the Scouting Movement because you get taught how to be part of a team and how to look after yourself and that is actually really important.” 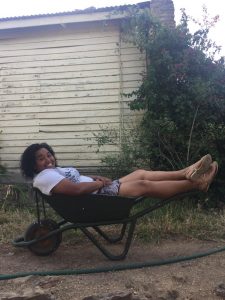 So, will Ruth be using any of her Scouting skills as a parent? “I think the best thing about Scouting is that you learn it’s not always just about you. When you are part of a team, there are other things that you need to consider. Being a parent is similar to that. You have to realise that it’s not just about you. You have a child now and you have other people around you that can help you, so you don’t have to do anything on your own the whole time. I also think that the Scouting values are really important. I feel that through the Promise and Laws and the Scouting value system you build up character and good citizenship. As a parent you want to teach your child to live a nice, proper life. You want to teach them values. For example, I have a dog and love animals so I want my child to  “be kind to animals” (one of the Scout laws). And … thanks to Scouting, I will be able to tie my baby’s nappy with a reef knot!” 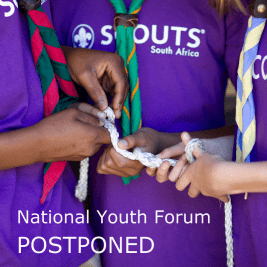