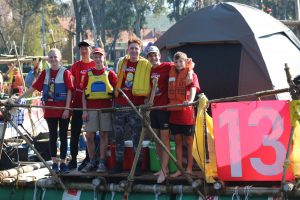 The Minions are coming! This was the theme selected for the Gauteng Region’s 35th annual Kon-tiki raft-building Competition. Held each year at the Arrowe Park Scout Camp on the edge of Homestead Lake in Benoni, this year’s edition attracted entries from some 60 Scout Groups from all over the Gauteng province. Approximately 1000 Scouts participated in the event. The local Sandton District was also well represented with raft teams entered from the 1st Bryanston, 1st Morningside, 1st Peter Place, and 1st Rivertrail Scout Troops.  1st Fourways, 1st Parkmore and 1st Midrand Troops were also in camp for the weekend.

Teams arrived on Friday afternoon, and began setting up their camps and started building their rafts.  Scouts were encouraged to incorporate the Minions theme into both their raft design and construction, as well as their campsites. To ensure safety, the rafts were inspected continuously, until they were ready for launch on Saturday. A team of 6 to 8 Scouts then had to spend the next 24 hours out on the lake on their rafts, which had to be equipped with the necessary cooking and sleeping equipment. During this time, the teams also had to complete a number of tasks, to test the mobility and seaworthiness of their rafts. For the shore-based supporters, several other activities and challenges were also provided. These included a cooking competition and the judging of their campsite construction. 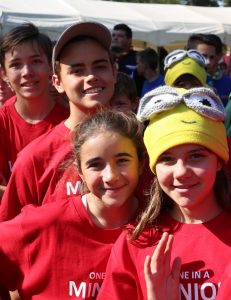 Brinley Harriss, Matteo Pianezze (back), Noemia Niehaus and Nadia Ludwig (front) at the opening ceremony before the rafts were launched.

On Saturday afternoon about 800 Cubs visited the campsite to participate in the Beaver Challenge, a series of fun games and activities provided by the participating Scout Troops. Judging from the tired but happy faces at the end of the afternoon a great day out was had by all!

Jan Schubart, the leader of the local organizing committee, said he was very happy to see the spirit and enthusiasm displayed by the Scouts over the weekend. Since the very first Kon-tiki held at Murry Park in 1985, this event has continued to grow in popularity and numbers.

SCOUTS South Africa also runs a similar Kon-tiki competition in the Western Cape each year, which is held at Zandvlei in Cape Town. The idea behind this event has also spread internationally, with Scouts Australia adopting a similar raft building competition as part of their programme.

The overall winner of the Gauteng Kon-Tiki competition this year was the 10th Pretoria Arcadia Scout Group. 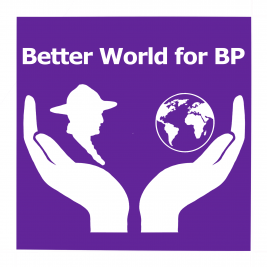