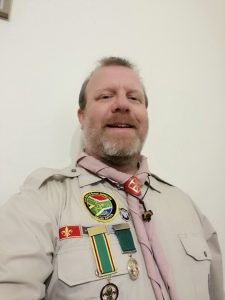 Father Charles Prince is a well-known volunteer in the Western Cape Scouting community. He is a catholic priest serving in the impoverished Langa Parish of St Anthony’s and also oversees the Youth Ministry in the Archdiocese of Cape Town.

Father Charles was invested into the Scouting Movement as a Cub in 1988 and has been involved in various capacities since then. “I first heard about Rovering when I was doing my Cub Warrant Course as an 18 year old. The thought of a group of other Scouting adults who both helped out in the Movement and had an active social and service programme was very appealing to me”, he explains.

“I was involved in Rovering up to (and a little past the maximum age), but I am now serving in other capacities. I started as a Rover with 1st Bergvliet from 1998 to 2002 and continued as a Rover with the Constantiaberg District from 2002 to 2005”, says Charles. “I was also the Assistant Provincial Commissioner for Rovers in the Western Cape from 2005 to 2009 and Assistant National Commissioner for Rovers from 2009 to 2012.“ Although I had Regional and National positions, I took over the role as Rover Scouter for Sea Eagles Rover Crew from 2009 to 2012 and stayed with the Sea Eagles further as a Rover from 2012 to 2015”, he adds. Some of his best experiences with Rovers were serving on the International Service Team for the 21st World Scout Jamboree and taking part in various Rover competitions and events.

“I believe in the value and necessity of Rovering within the Scout Movement now more than ever”, Charles says.“100 years ago young people were taking on fully adult responsibilities at 18, but today this is often not the case and so it is vitally important to have a space in the Movement where young people can continue their growth and development with some sort of oversight, but in a more flexible environment than a Scout Troop.” It is also the ideal space for young people who lack the time, inclination or maturity to move directly from Scout to Scouter, but wish to remain in the Movement.

“I think that Rovering has had some impact on communities through the various community service projects that individual Rovers and Crews have engaged in, but the primary impact has been on the Scouting community by providing a resource of dedicated young adults who help at every level and at every event in the Movement. I hope that there will be a mechanism to follow up in every District what happens to the Scouts who turn 18, and to try and have at least one Crew in every District in the future.”

“All in all I would say, Rovering is a wonderful opportunity to make friends and spend time with like-minded people, getting involved in all of the fun and excitement of outdoor Scouting, but also to serve the Movement and the wider community and engage in social events and activities”, Charles concludes.