East Rand District Commissioner Mike Weeks recently sent out an appeal for support in kind for the Geluksdal Scout Group in Tsakane. “I requested the donation of a tent / marquee for the Geluksdal Scout Group and I am extremely pleased and proud to advise that we received a donation from a donor who wishes to remain anonymous” explains Mike.  “With the money donated, I was able to purchase a brand new 5 x 10 meter PVC tent, complete with poles, pegs and ropes.” The tent was handed over by Mike to Bafana Shabangu, Scout Group Leader of the Geluksdal Scout Group, at the East Rand District Scouters Council meeting.

At the time of making the donation, the donor said “Scouting gave me so much and I feel I may not be able to dedicate time to the Movement, I am however able to direct resources…. and I’d love to get behind this.”

“In addition to the tent, a donation of 5 trommels of ropes was received from the Harmelia Gardens Air Scout Group. Thanks to Shane Tyson for the generous donation” continues Mike. “This too was handed over to Bafana. On behalf of the East Rand District, I wish to extend my sincere thanks and gratitude for the donations received.  These will go a long way in assisting the Geluksdal Scout Group with their Scouting activities.  They now have a new tent to keep themselves dry during their Scout meetings, and lots of rope to brush up on their pioneering skills.” 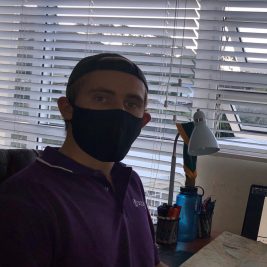