In November 2009, when I was only 5 years old, the UN General Assembly declared the 18th of July “Nelson Mandela International Day”, in recognition of the former South African President’s contribution to the culture of peace and freedom.

At the time this did not mean much to me as I was just too young to understand. Over the next few years, the schools I attended traditionally did something for Mandela Day, whether it was collecting socks and soup or making peanut and jam sandwiches for the needy. It was then I started to understand what this was all about.

Roll forward to the 15th of March 2020 when the President of South Africa, Cyril Ramaphosa, declared a national state of disaster, and announced amongst other things, the closure of schools from 18 March. A week later, on 23 March, a national lockdown was announced, starting on 26 March 2020. This meant that children who were fed at school were no longer getting what could sometimes be their only meal of the day. On top of that, many people would lose their jobs as businesses could not afford to pay people. This got me thinking of how privileged I was to live as I do.

On 1 June 2020 I returned to a new sort of normal of attending school. Packed in my lunch bag was all the necessary food and drinks I had for the day, together with a few nice to haves. While my mom was driving me to school, I saw more and more beggars on the street. The news on the radio was filled with sadness around people going hungry and not having money to buy even a loaf of bread.

It made me extremely proud and happy to be able to at least help in some little way towards the hungry.

This made me think that I had to find a way to assist, even if it is just a few families. It was then that I saw the SCOUTS SA Facebook page challenging Scouts across South Africa to prepare Jars of Hope for Mandela Day. I jumped at this opportunity and challenged my Scout Troop, 9th Irene Air Scouts to assist with this project.

At the time my school, Amedeo, had not come up with a suggestion for a Mandela Day initiative and I thought I would jump in before they came up with another plan. I contacted our headmaster who immediately replied to say that he would put the challenge out to the entire school.

Next part of the plan was to find where to donate the Jars of Hope to. No problem there as we have residents in our estate who are involved with feeding the needy. An agreement was reached to donate half to one feeding scheme and half to another. At this stage I never in my wildest dreams thought I would be donating 70 Jars of Hope (enough to feed 240 people) to the needy.

On Friday 17 July 2020 I arrived at school to be told that there are countless Jars of Hope waiting for me in the kitchen. There they all were. All 70 Jars of Hope to my surprise. This made me extremely proud and happy to be able to at least help in some little way towards the hungry.

Scouts has taught me so much, given me confidence, built friendships and I look forward to physically attending Scouts again. In the meantime, I will keep trying to challenge myself to advance as much as I can in these trying times. Watch this space!

Scouts remember, a Scout keeps whistling and smiling under all circumstances. 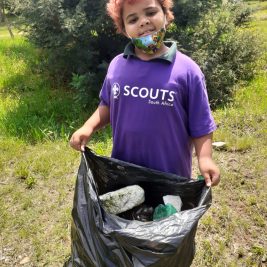