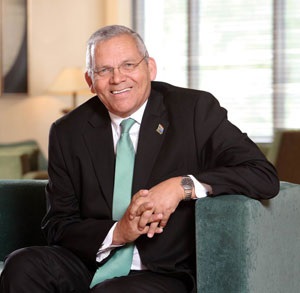 Professor Brian Figaji is renowned within the Scout Movement for his integrity, for embodying the Scout values and for his drive to ensure that Scouting remains relevant and accessible to young people in South Africa. Over the years he has been instrumental in revitalising Scouting to what we know it to be today. We sat down with Prof Figaji and chatted about the impact this Movement has had on a lad from Elsies River in the Western Cape.

“I joined the Scouting Movement as a Cub in Elsies River when I was 8 years old together with a friend from school”, he explains. “I have fond memories of those early years as an active Cub until my family relocated to Bellville-South. Unfortunately, there was no Scout Group in Bellville-South at that time. In 1961 – when I was 17 years old – I heard that a Scout Group had opened, and I went along to join. I think I was attracted to Scouting because of the uniform and the discipline it offered. I still believe that the Patrol system is one of the most powerful methods of teaching leadership; you learn by doing under careful supervision. The Patrol system gives the Patrol Leader real responsibility at an early age and holds them accountable for the progress of each individual in the Patrol. Since I joined at 17 years old my Scoutmaster decided to make me a Junior Assistant Scoutmaster. Scouting opened many learning and training opportunities for me. I was able to hone my abilities and got a much clearer understanding of the impact of the Scout value system which was of particular interest to me. For example, I was fascinated by the fact that while we play games to release steam and provide a break in the training, it importantly is an opportunity to teach honesty and teamwork”, he adds.

Patrol Leaders highly influence and shape the lives of the young people they lead.

“I was determined to be the best leader I could be and completed all the training required to achieve this objective. In June 1968 I completed my Scout Wood Badge. I still remember the weekends of training with Perry Ogle at the Gilray Scout campsite. We had to work late on our spare time activities, get up early to cook meals after spending the night in tents and in a campsite, and we were required to prepare for inspection every morning. I still remember how tough the trainers were on discipline. I really believe that Wood Badge training was a good preparation for all of us that would venture into the corporate world someday. At my Troop meetings I used to have black and brown shoe polish available so that the Scouts could prepare for inspection of their appearance. Instilling the little things about respecting yourself and the way you present yourself, helps to develop good habits and improves discipline. To this day I tell my grandchildren to polish their shoes before going to school”, he quips.

When asked about some more memories of those days he laughs. “There are so many! I fondly recall camps at Gilray, and hikes to Strandfontein and Silvermine. Being in the outdoors and engaging in many activities were my favourite things to do. In May 1971 I stepped into the role of Warranted Group Scout Master at 1st Bellville-South.”

Professor Figaji stayed in that position until he became an Assistant Divisional Commissioner and a Trainer in 1975. “I think that people often underestimate the impact that activities, team work, hands-on training and the Scout values have on the skillset of adult volunteers. The organisational skills and team leadership abilities I acquired during those years, helped me greatly in my professional career outside of Scouting”, he explains.

People underestimate the impact and help the Scout values and training give adult leaders in their professional roles.

Over the years that followed Professor Figaji held various positions ranging from Regional Commissioner, Assistant Area Commissioner for Adult Leader Training to Area Commissioner. He also led and participated in several international Scouting events. . “Scouting broadened my horizons and I learnt a lot about myself and others during my time in leadership. The values Scouting embodies were as significant then as they are now. In 1975 I was part of one of the largest and most diverse Scout contingents SA ever sent to a World Scout Jamboree. We chartered a jumbo jet to London, after a few days in London we crossed the channel by hovercraft to Calais. In Calais each of the nine Troops boarded their own coach for the pre-Jamboree tour through Europe and finally to Lillehammer in Norway. I was a Troop Scoutmaster with three assistants and four Patrols of 8 boys each, making a total Troop of 36 persons Given the political climate of our country at that time, the jamboree provided a lot of food for thought and changed mind-sets within the group of young people who went along. I think from that perspective this specific Jamboree experience was ground-breaking. It was also at this event that the SA contingent did the gumboot dance as the national campfire presentation.” 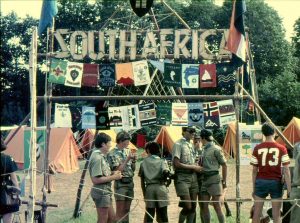 A few years later, in 1977 Professor Figaji played a crucial role in the amalgamation of the four Scout Movements into one united Scouting organisation free for all, regardless of race or religion. In 2000 – as a member of the Executive Committee – he was instrumental in helping the Movement grow and adapt to societal needs, such as opening up to include girls. More recently, he drove the revitalisation of Scouting once more through Revit.

As a dedicated Scout in heart and soul Professor Figaji has not shied away from taking the hard decisions to ensure the social utility of SA Scouting. “Scouting is so relevant now more than ever”, he says. “Our current society is not the same as it was when I was a young man. The current social norms have changed quite dramatically for whatever reason and our communities are fragile and uncaring. Our young people and even many of our leaders have lost their moral compass and to restore the sense of community we need to do something urgently. Today there are not many families with two parents. For many adults a lack of time, ability or desire to pass on critical life skills creates a situation where our future generation are not being equipped to provide leadership in our communities and even in our country.  If we want a better society, we, in each community, will need to work towards that goal by volunteering our time and energy to make a difference. In this regard Scouting is in my view the most appropriate vehicle to help to restore the moral fibre of the youth by instilling values and building character.”, he continues.

Scouting could rebuild the moral fibre of our society.

“Living and leading based on the Scout value system can have a very far reaching impact on the society we live in. Scouting develops persons of good character, and teaches young people to internalize values such as honesty, loyalty, courtesy, obedience, thrift, helpfulness and cleanliness. It is a programme that can enhance our future leaders’ competencies around managing people, communication, project management, problem solving, and personal and professional development. If Scouting would get broader recognition, it could help to restore the moral fibre of our society. Scouting offers an investment in ethical societal development that can create good citizens who take care of their spiritual, social and intellectual advancement, and that of their communities. This is exactly what South Africa needs at this critical time.” 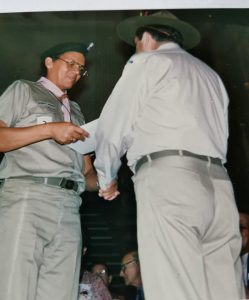 Professor Brian Figaji was the Principal and Vice-Chancellor of Peninsula Technikon for ten years, after joining the institution as head of the Engineering Department. He also played a role in shaping the new higher education system in South Africa as a member of the National Commission on Higher Education and on the Council on Higher Education. He was also the Vice-President of the Engineering Council of South Africa; is a Fellow of the Academy of Engineers, and a Fellow of the South African Institute of Civil Engineers. In 2005 Prof Figaji was appointed to represent SA on the Executive board of UNESCO in Paris, and was appointed by the President to serve on the Advisory Board for National Orders.

Professor Figaji has been the recipient of many awards in the academic field such as an Honorary Doctorate of Humane Letters in 2001 by the California State University, Hayward and an Honorary Degree of Doctor of Education from Coventry University in the UK in 2002 for his outstanding contributions to education as a means of social and economic development. For his service to the Scouting Movement he received the Medal of Merit, the bar to the Medal of Merit, several Long Service Awards, the Order of the Silver Protea and the highest Adult Award within SCOUTS South Africa, being the Silver Springbok. 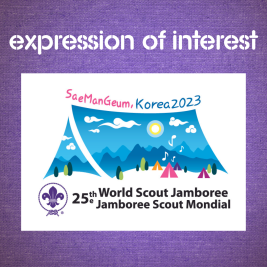