Johann Harzon is a Rover and adult volunteer in the Western Cape. He is also currently the Head Warden of the Western Cape Appleton Campsite on the top of Signal Hill. Here he shares his Scouting journey and his path to his recently awarded BP Award.

“I can comfortably say that I have given my all and done my best to achieve this accomplishment and that it has greatly influenced the man I am today”, explains Johann Harzon when asked about his journey to BP. “So where to start… I was a Scout and got my Springbok at 1st Pinelands Scout Group in 2014. After that my Scouting journey split into two. My journey as an adult leader was rather timid initially. I began as an ATS at 1st Pinelands for 2 years before I found myself studying in Stellenbosch. I began assisting at Troop meetings as an ATS for 1st Stellenbosch in 2017 and assumed the role of Troop Scouter by late 2018.

My Rover journey ran concurrently. I was a part of starting up the 1st Pinelands Rover Crew where I was an active member until Mid-2016. When I made the move to 1st Stellenbosch, it was evident that there was an opportunity for a Crew given the large number of ex-Scouts studying in the town. It was not easy at first as I had to sell the idea of a Rover Crew, but we were soon under way. Many of these Rovers also contributed in ATS roles for the Troop which assisted in reinvigorating Scouting in the area. The 1st Stellenbosch Rover Crew operated for 2.5 years but struggled to continue its momentum in 2019. Alas, on the 1st of August 2019, the Crew folded.

Due to Covid-19, we could not physically run activities with 1st Stellenbosch, and I also could not visit the Troop as much as I would have liked. It was then that I found a way to stay close … Operation Covert-19 was born! One hundred random activities ranging from getting an Interest badge, to baking a cake, and making your parents dinner. The activity was meant to keep my Scouts busy while they were stuck at home due to Covid-19. Surprisingly, it was picked up by over 50 Troops across 7 Scout Regions. 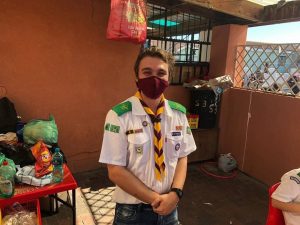 Fast forward to March of 2020 and I had moved back to Cape Town, ready to get back on track with the Rover programme and my own advancement. I had realised that with Covid-19 came not only new challenges, but also new opportunities. The suburban CAN (Community Action Network) initiatives saw affluent suburbs assisting less affluent suburbs with the mobilisation of essential goods. As members of the Scouting Movement, we had access to Essential Service Certificates which allowed our members to freely move while partaking in activities that provided aid. It was at this point that I found out about the pressing need to get clothing and food into Khayelitsha. With a project for my Community Bar identified, all I needed now was a Rover Crew. I had met Lexiy Lancaster, the chairperson of 6th Rondebosch Rovers at the time, previously at 13th Gilcoast (EC PLTU) in 2015. After talking to her and John Fraser, their Rover Scouter, I was accepted into the Crew. Not even a week later, I proposed a massive service project that set out to donate 200 articles of clothes and feed 500 individuals to a group of absolute strangers who I am convinced thought I was crazy. These same individuals turned out to be the greatest of champions and friends in the face of a daunting project. On the 16th of May 2020, 21 Rovers / Adult Leaders coordinated a soup kitchen at Site B, Khayelitsha to assist in alleviating hunger and provide comfort in the form of warmth ahead of the Cape Winter. The project was a resounding success, and I had also achieved my Service Bar.

However, Covid was not all rainbows and sunshine. A combination of many weeks of introspection and conversation with mentors led me to taking one of the biggest steps in my personal life. In October of 2020, I admitted myself into a psychiatric clinic to attend to my on-going mental health concerns. After consulting with the necessary professionals, recommendations were made, and subsequently I made the decision to resign from my role as Troop Scouter from 1st Stellenbosch on account that I could not afford the Troop the consistency it required.

Gloom aside, there were still many things to look forward to! The next big Rover activity was Dylan Ribban’s hike. Originally it was going to be a 100kms hike over 6 days that we cut short to 80kms over 5 days in the Cederberg (apparently, we were unfit). This adventure was documented in 10 one-minute-long videos that cover the 5 days. These videos formed part of my Project award for which I taught myself cinematography and video editing.

In September 2021, I was appointed the Chairperson of the Rover Advisory Council (RAC) for the Western Cape. This has been a great honour but has also presented its fair share of challenges. During my tenure, I organised a Skills Camp in December 2021 and had 19 Rovers across 6 Crews present. This turned out to be a great networking opportunity and served as the Skills requirement of my St George Award. Straight after the event, we headed to Hermanus for my Leadership Bar expedition. This was to be my final activity for my BP Award. We hiked from the back of the suburbs in Hermanus to the Sip Lodge in the Vogelgat Private Nature Reserve, before descending to Maansskynbaai where we jumped in K2s and paddled across to Gecko Bush Camp. The entire activity went smoothly until we started the paddle back across the lagoon. After a few capsizes and picking up the Patrol members who couldn’t launch due to the winds, we finished the activity in one piece. A huge thank you to Dirk Troost for being our go to man and guide in the area.

In comparison to previous years, 2021 and 2022 were rather boring. However, in November 2021 I was afforded the opportunity to become the Head Warden of Appleton. Together with three other Rovers we are currently managing the facility and are working hard to renovate it to offer better accommodation and training. We have had a lot of assistance from Aussie Raad, Charles Prince and youths from around the Region. 2021 also saw me begin my Scout Woodbadge which was one tough adventure. The highlight was most definitely acting as the Chief Judge of the Rayner Trophy for my legacy project. I had grown up with the competition playing a massive part in my time as a Scout and it was greatly sentimental to be able to be Chief Judge for the competition as the final requirement in my Adult Leadership journey. It was a moment I shall never forget.

In March 2022 I was able to complete my Panel interview for my BP Award and when I heard in April it was approved, I was relieved and excited. On the 7th of May 2022, I was award both my BP and Woodbadge at an intimate ceremony at Appleton, joined by my Crew and Norman Davies who was my Troop Scouter whilst I was a Scout at 1st Pinelands. Thank you to all who have been a part of this journey”, he concludes with a smile. 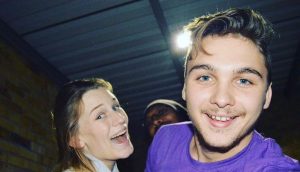 When asked if he has a last word to share with his peers who are considering their journey to BP, he says “This experience and the opportunities I received are what they are because of the people I met, and the memories made. I implore all considering the BP Award to not fear this unknown, but to embrace it. It is a journey of self-discovery that takes you to places you’d never think you would go. It is a journey of adventure and friendship. Through Rovers, I have travelled South Africa, made countless friends and for this I am grateful. Grateful for the memories, the opportunities and most importantly, grateful for the life it has afforded me to lead.” 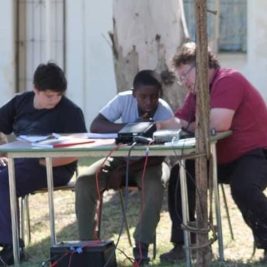