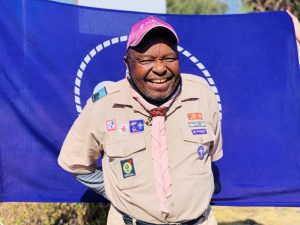 With the Gilwell Reunion coming up on the 3rd of September, we decided to get a perspective of Scouting from one of our Scouting veterans, Mr Kabelo P. Phoshoane – or “Papa Phoshoane” as he is known in Scouting circles.

“My father was a Scout and my mother was a Girl Guide. When I was old enough I joined the Scouting Movement alongside my father’s in 1964 as a Cub in the 3rd Thaba-Nchu Scout Group in the Mangaung District”, explains Papa Phoshoane.  “Four years later I went up to Scouts. When I grew up I chose to be a professional teacher and was recognised in 1979. I obtained my Woodbadge in 1983 in the Northern Cape, under 3rd Thaba-Nchu and then 2 years later began my Scout Master journey.” In 1994 he was appointed District Commissioner of the then Northern Transvaal under Bophutha-Tswana at Thaba-Nchu, which later became the Thaba-Nchu District.  A year later he took a break from Scouting. 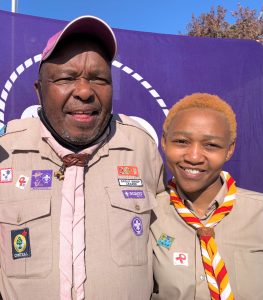 Earlier this year Papa Phoshoane became the Scout Group Leader of the 1st Calvary Church Scout Group where he now transfers the skills he gained as a young man to the Cubs and Scouts. I asked Papa Phoshoane how Scouting has changed for these youngsters from when he was a young boy. “The techniques used today meet the generational time of the moment”, he says with a smile. “I’m very happy with the changes as things are not the like the olden days. Balance was needed and is now being implemented successfully. I’m also overwhelmed about the youth influencer programme. Most positions in the region are occupied by boys, so I am happy to see that our regional influencer is a lady.”

“The biggest challenge we face is that of awareness”, he continues. “I feel like people are not aware of Scouting. For example, when we have local Scouting events in our neighbourhood people get shocked that Scouting still exists! It’s a pity that we cannot reach every part of the region, but we hope someday we will get to change the perspective of parents, and everyone in general that good people exist, and that those good people are us  – the Scouts.”

Over the years he has seen many Scouts grow through Scouting, “I keep a list of my Scouting kids who are now grown up, are still well mannered and occupy high positions within their careers. They still practice what they were taught in Scouting”, he states with pride. “I myself was young when I joined the Scout Movement, yet today I still preach the same words – even at the age of 69″, he laughs!

So what keeps Papa Phoshoane going” “I think it is the humanity that comes from our values, mission, and purpose as Scouts. In my youth I demanded from myself that I would be a better version of myself which made me gain focus. It was an opportunity to know himself, to socialise in churches, and to learn about the link between Scouting and education.”