Lindiwe Mokoena is a mother to 3 boys aged 28, 23 and 12 respectively, and is also an Akela, and the deputy principal at Clarens Combined School. She was introduced to Guiding at a very young age in Warden as a brownie. After completing her Standard 5 ( now known as Grade 7) she joined the Scout Movement. “I had never heard about Scouts after my Standard 5 until 2017 when Mr. Mofokeng visited my school to launch it. I was so excited”, she explains with a smile.  “Within no time I grabbed  the opportunity as I knew that this Movement and my decision to join would change my character, mindset and behavior, as well as that of my fellow learners in a positive manner. I then became a 1st Clarens Scout under the leadership of Mr Mofokeng.”

Everyone who knows Scouting, knows that once you become a Scout, you are always a Scout.  Lindiwe juggles many roles and responsibilities. I wanted to know why she invests her time in Scouting and how she keeps up with everything. “It’s surprisingly easy and it’s not really a challenge because children are involved in all three of my roles mainly being a mother, a deputy principal, and an adult in Scouting”, she says. “I first experienced a little challenge with the Scouts programme which was supposed to be on Saturdays, but I asked the principal to put the Scouts meetings in our extra curricular activities”.  she explains. ” Due to the responsible and respectful learners who joined the Movement, the principal agreed because when obedient children ask for something it’s rare he says no, most specifically in a circumstance of building children’s strong fundamentals” she adds. 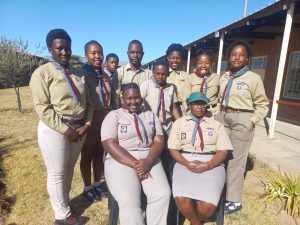 Lindiwe’s son youngest son is now also a member of 1st Clarens Scout Group. On Saturdays, they both join the Bethlehem Scout Troop and also attend camp together.  “The main purpose of Scouting is to develop the youth through a programme of activities designed to prepare them to cope with the world as responsible citizens and balanced human beings”, continues Lindiwe. “As a leader it is my responsibility is to facilitate and manage the programme effectively so children can just join Scouts for fun and excitement. Irrespective of which role I play, as a leader, the more fun and adventure I provide, the more successful I will be in achieving the aims and principles of Scouting, and the more eager the youth will be to do their best and achieve the goals they set for themselves.”

Lindiwe definitely practices what she preaches and leads by example! Her determination, participation, involvement and engagement with every occurrence in the Movement shows young people what is possible.  Baden Powell once pointed out that he established Cubs because younger boys had nothing to do, while the older boys were busy with their activities. Much in this line, Lindiwe stepped into uniform to become Akela. “I believe that children from the age of seven to ten are often left behind here. I decided to step up and assist them from an early age and help them refrain from committing illegal and unnecessary things in the community”, she concludes.

In Sesotho there is an expression “e kojwa esale metsi” , which loosely translated means that when you positively mould the minds of children at a young age they become stronger in life.  It is clear that Lindiwe Mokoena is doing just that for the children in her community and her school, which shows us just how well the practical world of schooling and Scouting align. 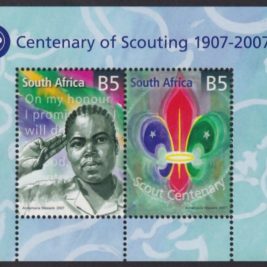