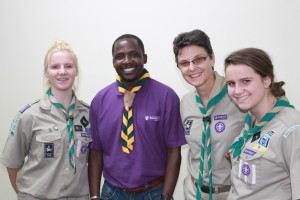 For over a decade both girls and boys have been enjoying the thrills and life lessons experienced through the South African Scouting Movement. In light of Women’s Day SCOUTS South Africa wanted to shine the torch on some of the remarkable women that are active in our country. Janet Prest-Talbot has dedicated her life to promoting children’s rights and civic engagement. We spoke about dreams, the impact of Scouting on her girls and her own Scouting journey.

“I’ve always known about Scouting but as it was not open to girls I was not a member. In my childhood I had the opportunity to camp with the Scripture Union, adventure with the YMCA and hike and climb with the Mountain Club of South Africa.  When a fellow Scouter turned 80 and mentioned he started Scouting only 30 years prior, putting him at 50 years old, I thought there is still time to be a Scouter and joined up when my daughters Troop needed more adult leaders.

“I have two daughters who are ardent Scouts. Anna is now in university after a Scouting career of going to a Jamboree, doing the Senior Adventure in the Cederberg Mountains twice, being a Troop Leader and a Springbok Scout. She was also the first girl Troop Leader of the KwaZulu-Natal Patrol Leader Training Course.  The development opportunities she received in Scouting built her up to take on other leadership roles including being Deputy Head Girl and other leadership roles in her school. Her sister is enthusiastically following in her footsteps and is also soon to embark on her Springbok Award and journey to the Japan Jamboree in 2015.  I’ve just joined them to share the fun!”

Janet’s heart and drive are rooted in community upliftment projects and the empowerment of children. Not only is she the Assistant Troop Scouter for 4th Durban St Thomas, one of the oldest Scout Troops in the country at 102 years old, she is also a very successful children’s rights activist, published author and entrepreneur. For many years she was a programme leader, working with children in inner–city Durban YMCA and later at the Child Rights Centre in Durban. Recently she started her own business, ‘Play WorX’ which focuses on promoting a child right’s to play and developing playgrounds and play programmes in partnership with the communities where they are established. “I appreciate the emphasis that Scouting puts on promoting civic involvement and community service. One of the projects my Troop has been involved in is to recycle waste tyres and create play parks for children in less privileged areas. Through this activity they learn new skills, clean up the environment as waste tyres are a problem globally and provide fun for their peers.”

So with all her experience what stands out about the Scouting programme? “I think that the Scouting methodology is great. It is a child participatory approach that motivates them to progressively learn by doing and to become confident, problem solving creative thinkers. Lord Baden Powell’s methods align with my own life philosophy and view on how children can take responsibility for their lives if given a chance. I also feel that Scouting is a fun activity for parents to engage in with their children. I mean not only do you get to learn progressively in the outdoors but you get to laugh together and see how your child grows and gains confidence in their own abilities. It is so rewarding to know that you are investing in the capacities of your child and our nation as a whole. It’s like you are temporarily providing the scaffolding around a child, so when you take yourself out of the equation he or she is able to stand alone and be prepared for a successful life ahead.”

With a great love for the outdoors she also considers Scouting as a stepping stone for environmental preservation and sustainability. “Children who have been exposed to the beauty of our world and lived, worked and played in it, will protect it.   In Scouting children become ’creators and constructors’ of projects and activities rather than consumers and in this way they will have the leadership skills to make a difference, hopefully, for the rest of their lives. ”

Let us know more about the remarkable women active in our Scouting Movement! Email pr@scouting.org.za 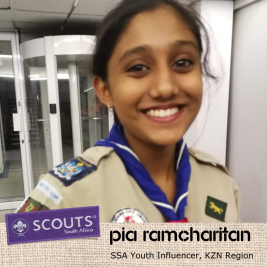 I learnt to trust, to be bolder and to lead
Read More
Scouts Wiki