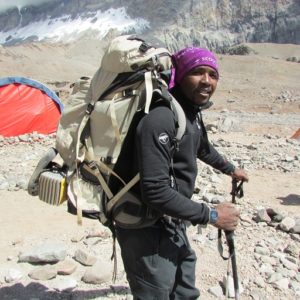 For an adventurer and mountaineer it is always very exciting to begin the year on a high! I got the chance to return to South America as a guide for an Adventure Dynamics Aconcagua expedition.

We left South Africa on the first week of January and I had eight climbing enthusiasts with me. I was very excited and pleased to be able to return to Aconcagua as last year we were not able to summit as we got hit by a serious wind and snow storm. So it was fingers crossed that this year we would summit.

We climbed along the popular route called False Polish Glacier. The first few days of the climb were as good as always. We got to base camp and my team was in good spirits and all members were acclimatising okay. A full day’s rest at base camp gave us more energy for a load carry and acclimatisation climb to camp 1, after which we also took a day to rest and recover after the energy sapping activity. On reaching camp 2 we decided to skip the day of resting we had planned and push through to camp 3 due to unreliable weather conditions. It was the only way we could stand a chance to attempt summiting Aconcagua. Whether or not one can summit a mountain depends on one’s ability adapt to the weather. I was happy with my team’s attitude and willingness to be that flexible for us to stand a chance. 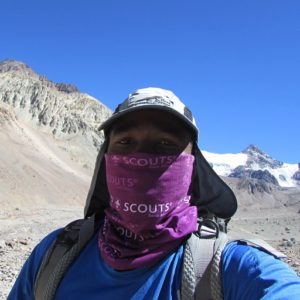 Camp 3 is situated at 5000m and you always feel the altitude, as a result we don’t hang around there for too long. We rest, get up and go for the summit. The winds were raging during the night and I could not sleep as I saw the fate of last year right in front of me again. My heart sank, I started to question a lot of things, but I could not find an answer. I was still wide awake when the assistant guide came to my tent and called me. “Sibu”, he said’, “we can still climb. I prepared some water and food to take with us for the summit attempt.” With a smile I replied “Wonderful news my friend”, then got up and ready to go.

There were not many teams up there so we could not see what others were doing and so took the challenge head on! At 6 am, we called the team to get out of their tents and get ready for the big day. Within no time we were climbing up, the wind was still raging! One climber said she was scared of the wind and wanted to go back, so she returned with one of the guides. Barely 20 minutes into the climb I had lost five members of the team, had they all gone back down to the comfort of their tents to sleep. This wasn’t looking too good. But I was pleased to see that three of my team members wanted to keep going.

Nine hours later we were on the summit of the highest mountain in the southern hemisphere, Of the five times I attempted to summit Aconcagua, this was the fourth time I reached the top. Those who tasted victory on the summit, did it because they managed to dig deep. I was very proud and happy for my team members for their resilience, determination and never say die spirit! After all if you want to achieve anything of great value, you need to persevere and dig deep! 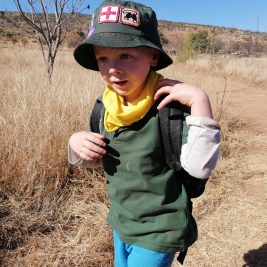