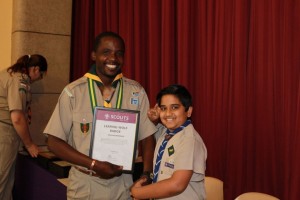 The future of Scouting in KwaZulu-Natal looks promising after 65 Cubs and Scouts were presented with their Leaping Wolf and Springbok Scout Awards at the annual KZN Scouts Awards’ Ceremony on 22 August. Chief Scout Sibusiso Vilane was on-hand to personally present each award. The event was held at the Pinetown Methodist Church Hall.

After congratulating all the recipients Chief Sibusiso addressed them saying: “As youth you must realise that your future is in your very own hands,” and went on to point out that ” Scouting challenges youngsters to find out more about themselves than if they just stayed at home”.

Our Chief further challenged each of the Leaping Wolf recipients “You have just climbed one mountain to Cubbing success, now your Everest is your Springbok  Scout award. Each one of you is well capable of achieving this highest Scouting award”, he said. 1st Malvern Scout, Prean Naidoo, who received his Springbok Scout Award said “I’ve volunteered in the community, learned about conservation and explored the world around me. At the same time I developed my leadership skills as a Patrol Leader in the Troop. I’ve been in Scouting since I was 11 and the experiences have helped me become more confident and I’m sure the friends I’ve made will last a lifetime. Working towards my Springbok gave me the opportunity to experience some incredible activities from abseiling to sailing, I’ve pushed myself to reach the top of a climbing wall, challenged myself to cross rope bridges and had a great time doing it!”

Adult Leader, Denzil Barnard from 1st Hillcrest said, “As a volunteer Adult Leader it’s hugely rewarding to see young people from my Troop receive their Springbok Scout award. Over the past three years they’ve enjoyed some fantastic adventures as part of the Troop and their enthusiasm has made me and the rest of the leader team very proud of them.’

KwaZulu-Natal Regional Commissioner Steve Camp added, “All these young people have lived the adventure of a lifetime to achieve their Springbok Scout award. I admire that spirit so much! They are huge inspirations to all the other Scouts in KZN and I am so pleased that Scouting has honoured them today. They are amazing. On behalf of the young people attending today, I’d like to say a huge thanks to everyone who gives up their time to support Scouting.” The function was attended by over 250 people and organised by the Stainbank and Coastal District under the leadership of Guy Caws and Adrienne Van der Watt. 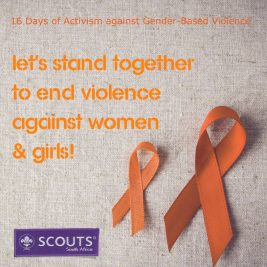