On Saturday the 12th of September over 1500 Scouts from the region converged to the Sports Ground Indlulamithi in the Hammarsdale to test their Scouting skills. Children and youth from as far as northern Zululand enjoyed the fulfilled competition in the presence of Minister of Finance, Nhlanhla Nene and Chief Scout Sibusiso Vilane.

Over the past two months Cub and Scout Groups throughout the Region have competed in District skill competitions. The winners of each District came together for this exciting Rally and showcased their talents and knowledge while competing to be the best in KwaZulu-Natal. For the 56th consecutive year this prestigious Scouting competition was an exciting and fierce event. 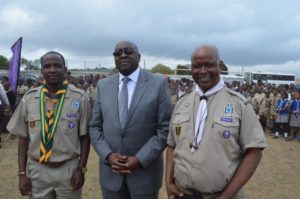 The Rally was officially opened by the KZN Rally organiser, Dr Goodenough Dlamini and Scouts and Cubs rotated to a number of bases where they were tested on their Scout Promise and Laws, knots, pioneering, cooking and first aid to mention a few.

After lunch it was time for the formalities leading to the eager announcement of the winners. SCOUTS South Africa Chief Scout Sibusiso Vilane addressed the children and youth present by emphasising that “everyone can achieve a realistic dream and make a success of their lives. Every child should not be held back by where they come from but should focus on where they are going to.” 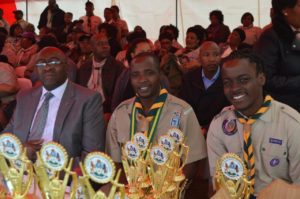 In his address Minister Nhlanhla Nene highlighted the importance for youth to lead a moral life, work hard and strive for success. “If more South Africans across all sectors embraced the values of Scouting, Scouting would become a home for so many more people, which would lead to a stable environment,” he said. “A Scout is a leader and a good Scout must have hope. Continue to uphold the values of Scouting as they will serve you well, and look to your Chief Scout who is an inspiration to all of you.” He continued by saying: “If we have civil servants and politicians who subscribe to the Scout values there would be less corruption. If we have a private sector subscribing to the values of Scouting, we will have a better world.” 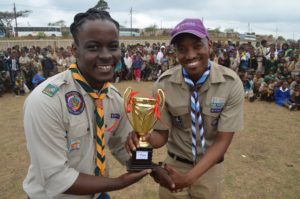 Over 40 trophies were presented to the joy of the children as much shouting and jubilation from the winning Packs and Troops could be heard. Winning Cub Pack was 1st Nyanga Pietermaritzburg district and the overall winning Scout Troop was 1st Botate from the Pinetown district. The trophies were all kindly donated by the Department of Education and handed out by SCOUTS South Africa’s National Young Leaders Representative Henry Sibande.

1st Bullz Rover crew member, Sabelo Ntenga summed up the general feeling of all who attended: “This Rally was truly awesome and we thoroughly enjoyed it. It was the first time our district of UThungulu had attended a Rally and for sure we`ll definitely be back next year!” he enthused.