Since 1982 the International Day of Peace is observed on the 21st of September. This year’s theme is “Partnership For Peace – Dignity For All”. Scouts all over the world are considered Messengers of Peace and earlier this year a number of Scouts from South Africa attended the Hiroshima Peace Memorial Ceremony as part of the 23rd World Scout Jamboree (23WSJ). Sixteen year old Imke Muhr, a Scout from 1st Pinelands Scout Group in the Western Cape was one of the selected few to represent our country.

Imke joined the Scouting Movement in July 2009 as a Cub and became a Scout in 2010. “I love outdoor activities such as hiking and camping,” she says “I spend most of my weekends doing Scouting-related activities.” Besides being outdoors she likes playing the violin, trombone and the piano and is active in a number of school bands.

Peace for Imke is not the absence of conflict, but rather the habit of resolving conflict without causing harm to other people. “Peace involves a lack of selfishness and the ability to recognize other people as having equal value and similar needs to you,” she explains. “It is the absence of fear and the presence of trust.” 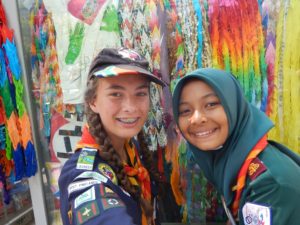 Imke with Thai Scout Narissara Mad-adam, in front of the Paper Cranes.

Earlier this year she took part in the Hiroshima Peace Memorial Ceremony at the 23WSJ in Japan. The ceremony was held to remember and reflect on the atomic bombing of the city 70 years ago, as well as to call for the abolition of nuclear warfare. “The ceremony was very moving”, she says. ““It gave me a new perspective on the impact of war on regular citizens. There were speeches from the Mayor of Hiroshima, the Prime Minister of Japan, the Governor of Hiroshima, as well as the Secretary General of the United Nations.” Before the ceremony, the Scouts present at the event handed out flowers to citizens of Hiroshima. Afterwards they placed over 1000 paper cranes made by the rest of the Jamboree Participants at the Children’s Monument in the Peace Memorial Park.

Imke wants to share the lessons she learnt in Hiroshima with her Scouting friends. She plans on bringing her new perspectives to any leadership position she hold within the Scouting Movement, thus passing on what she learnt thought actions as well as words. “I think everybody needs to learn from the past. Scouts are particularly focused on good citizenship and on good stewardship of the earth and its resources. At this point in the history of humanity, with all the wars and environmental issues we face, it is incredibly significant to have young people who realize that not repeating the mistakes of the past could result in the survival of the human race. However, we need to do more than realize it, we need to act on our realizations to make them meaningful. Scouting provides us wit the opportunity to do this.”

This years’ topic of the UN International Day of Peace is “Partnership For Peace – Dignity For All”. “If all sectors of society worked together to strive for peace, it would become easier to give dignity to each human being,” says the young Scout. “Obviously one can’t solve all world’s problems in one day, but if all partners from different segments of society attempted to increase peace on earth, the world would have been a better place. ‘Dignity for All’ also relates to our Scout laws, which is the expression of action that represents respect for other people, as well as for oneself.”

By virtue of being a Scout, Imke considers herself to be a Messenger of Peace. She has done a number of environmental community service projects with her Scout Troop and in her opinion, these type of projects also promote peace in local communities “When you improve the environment, you also improve the living conditions and the access to resources of people, which reduces conflicts, even if only a bit at each time. I firmly believe that unless you are creating peace every day in your small life, you cannot expect to contribute to peace on a global scale. As a Scout I feel that your Scouting is absolutely meaningless unless it is about more than just words. You can talk all you like, but until you actually live it, you are not a Scout.” 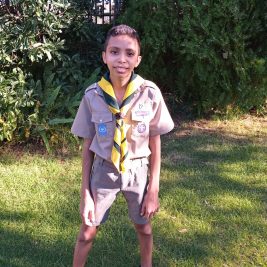