From the 23rd to the 24th of April I facilitated a “Radically Ready to Recycle” camp with the 1st Rosebank Cub Pack. In total 9 Cubs, 1 Scout, parents and two leaders joined in the fun! The camp was funded by the Alan Sol Foundation. 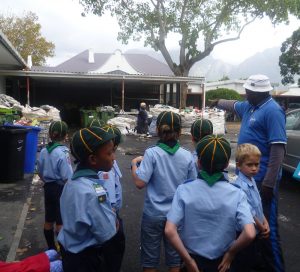 The camp started with a visit to the recycling company OASIS where they were shown around by a representative who explained every step of the recycling procedure. The Cubs got to see first-hand how you can reuse things that have been thrown away. They saw where their rubbish ends up and how they can help the environment by recycling it.

After the visit the Cubs were very excited to get started on the recycling competition which took place on the Rondebosch common right next to their Scout hall. The Cubs had to run around, look for rubbish and exchange it for life points.
The more they collected, the more points they got, which made them really eager to find as much 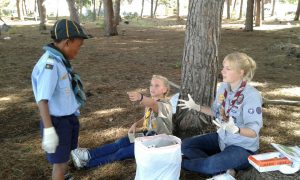 rubbish as they could. It was amazing to see how much energy they put into this game and what kind of rubbish they found. We were joking that they could have made us supper out of the things that they found in the bushes. The food items ranged from green moldy bread to spices, cornflakes and cutlery. 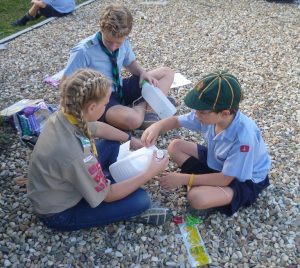 The items they found were then transported to the Scout Hall and they were taught how to re-use some of them. For example the Cubs made bird feeders and pooters out of jam jars, milk bottles, glue, rope and straws. That showed them that you can actually do something else with rubbish and that it can be used in another way. We ended the day by making our own fire lighters out of old newspaper to light our braai. In order to teach them a bit of cooking as well, the Cubs had to make their own “Stok brood” mixture to make some rolls for their boerewors. After a recycling good night story the participants had a great and deep sleep after a long day of input, running around and recycling.

The next morning began with PT and making breakfast for the leaders. This way the Cubs learned how to cook bacon and eggs and they were really proud of themselves as well as the parents that were surprised that their children could make breakfast on their own. Afterwards we continued with some games based on recycling and ended the camp with our closing ceremony where we handed out recycling badges to the Cubs and elected the winning team of the competition.

The participants and the parents were very happy with the results and said that they had great fun. It was a successful event with a lot of new experiences where not only the Cubs learned something about recycling but also the leaders.

The project showed the Cubs that throwing rubbish in the environment is not the right way and that there are alternatives to littering which are nicer and more sustainable.