Last year we asked members to nominate who they feel is “their Scouting Hero”. The independent Marketing Committee took some time to deliberate as it was extremely difficult to pick a person that stood out above others in being a hero in the true sense of the word. All our volunteers are heroes for the work they do to empower others. 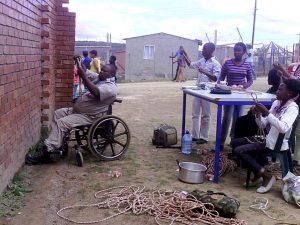 However, a winner needed to be selected and so congratulations to Mr Lunga “Rhino” Nqini, Troop Scouter of the Community Church Scout Group in the Amathole Central District in the Eastern Cape South Region.

The volunteers who nominated Lunga described him as followed: “Despite having a disability, he’s one of my heroes. He lives and breaths Scouting. In his years in Scouting he has done a whole lot of good in promoting Scouting in the Eastern Cape & the world. He has volunteered his time working on community projects and empowering children and youth from very rural areas. He is a role model to them! He shows them that even though they think there might be limits to what they can achieve, they can go beyond! He is the epitome of a Scout in my eyes. He is incredibly unbelievable.”

Marketing Committee Chairman Mr Gerhard Sagat had the following to say: “To have a disability and to succeed in life for yourself is already a remarkable achievement.  But to succeed for the benefit of others is distinctive!”
Lunga also received a ‘Bear Grylls Multi-tool’ to use during his many Scouting Adventures.

The nominees for the “2016 My Scouting Hero” were:

Mr Aidan Hewson
Scout group/position: Patrol Leader 1st Honeydrew Scout Group
Why a Scouting hero: “During the 2014 Cederberg Adventure, Aidan was a member of Team 40. On the first day of the hike, one of the female team members was indisposed and Aidan carried her pack for a substantial part of the day over steep terrain. This enabled her to continue with the adventure. Later during the adventure, on day 9, this same girl twisted her ankle and Aidan together with the rest of the team distributed and carried all her kit. He demonstrated the true spirit of Scouting.”

Mr Buzz Hugh Macey
Scout Group/position: Adult training team, Springbok hike adviser for the Western Cape Region
Region: Western Cape
Why a Scouting hero: “Buzzy is somewhat a legend in the Scouting Movement. He has trained and mentored countless Scouts and Scouters over the years in the Western Cape, making the Scout Movement richer for it. He also wrote the former Cub and Scout trails, as well as many other Scouting skills books. He never lets life get him down, he always looks at the positive in every situation and always has a story to tell. I believe Buzz is a scout hero and embodies the scouting ethos. Buzz has always been a role model to me, and I am sure countless scouts and scouters will agree.”

Mr Chris Shead
Scout group/position: Troop Scouter at 1st Bordeaux Scout Group
Region: Gauteng
Why a Scouting hero: “He is an amazing leader and mentor to his Troop and to the Scouts in general. He gives of himself tirelessly to Scouting.”

Mr Colin Schroder
Scout group/position: Committee member at 1st Walmer Scout Group
Region: Eastern Cape
Why a Scouting hero: “He has raised a lot of money and has gone out of his way to source sponsorship for Scouting, not just for our Group, but for other Groups in PE too. In doing so, Colin and his team have supplied many of us with equipment, assisted Scouts in need with school fees, assisted Scouters with training fees, sourced food sponsorship etc. for PLTU and the list goes on. He tirelessly works to give back to Scouting and both our young and adult members.”

Mr David Rees
Scout Group/position: Assistant Troop Scouter at 1st Hillcrest Scout Group
Region: KZN
Why a Scouting hero: “David Rees goes out of his way to instill the values and knowledge that our Scouts will need to become leaders in their communities. He is someone who really believes and follows the Scout promise. Dave ALWAYS sees the best in someone / something. He will always give a positive for a negative and gets us to think bigger and to see past the negativity in the world.”

Mr Gavin Kelly
Scout group/position: Troop Scouter at 41st Parks Scout Group
Region: Gauteng
Why a Scouting hero: “He is my hero because he always goes the extra mile, he will spend his private time to help a Scout that needs help. You can call him anytime day or night and he will be there for us, doesn’t matter what the reason is. He gives the Scouts a lot of credit and boosts them when needed, but is also very strict. When we go on a hike he gives us that “little extra scenic tour” because he feels that showing the Scouts our beautiful country while we are there and seeing their faces blooming with happiness, is worth more than words can say! He respects people no matter what their age or race and teaches us the same. In short, Gavin is what Scouting is about.”

Mr Ivor George Conway Jones
Scout Group/position: In memoriam – 1st Tzaneen Scout Group
Region: Limpopo
Why a Scouting hero: “My Scouting hero is Mr Ivor George Conway Jones, my Scout master from the 1st Tzaneen Scout Troop in the late 60’s and early 70’s. He passed away in 1984 at the age of 48. He diligently provided me and the other young people of Tzaneen the opportunity to enjoy the game of Scouting with many camps, hikes and much adventure. Because of him I am now an adult leader and I can carry on the tradition he started for me.”

Ms Kathy Douglas
Scout group/position: Troop Scouter at 1st Walmer Scout Group
Region: Eastern Cape
Why a Scouting hero: “She dedicates so much of her life to Scouts! Kathy treats every Scout as an individual and she loves sharing her truly awesome knowledge of Scouts with everybody. She treats everybody as an individual, just like the Scout law prescribes!”

Ms Kendal Fox
Scout group/position: Committee member at 1st Polokwane Scout Group
Region: Limpopo
Why a Scouting hero: “Kendal always goes the extra mile without being asked. She keeps everyone informed via Scouts email of everything happening at Scouts and Cubs. Kendal is the Scout mom for the 1st Polokwane Scouts.”

Mr Kevin McQueen
Scout Group/position: Highway District LA Chairman, Group Chairman 1st New Germany & Highway Scout Group
Region: KZN
Why a Scouting hero: “For the past 13 years Kevin has organised the very successful Highway District Raft race at Midmar Dam. When he took over the organisation, it was a small District event attracting approximately 100 campers over the weekend. He was instrumental in opening this event up to the KZN Region and it now attracts over 700 weekend campers and around 1000 people on the race day. Kevin lives the Scouting ethos!”

Mrs Mary Seru
Scout group/position: Group Scouter in the Mahikeng District
Region: North West Province
Why a Scouting hero: “She has been a Scouter for many years and has served the Movement with a lot of passion. Mrs Mary Seru always sits under the tree after the church service and waits for all the Scouts to come for the Group meeting. She is a mother to all the Scouts and other Scouters and is a brave and selfless woman!”

Mr Paul Brock
Scout group/position: District Commissioner at Stainbank District
Region: KZN
Why a Scouting hero: “Paul Brock is always there for the Scout Groups and adult leaders in his district. They consider him a dedicated and true leader who leads by example. He shows us that it is possible to live according to what’s prescribed in the Scout law and promise. He is a true role model for all of us.” 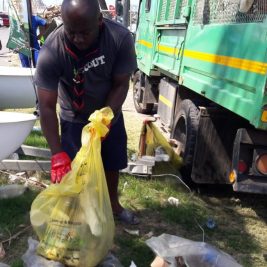