Mr Nimmy Abrahams was recently appointed Chair: National Scout Programme. We spoke to him about his life in Scouting and what he aims to achieve in his new position. 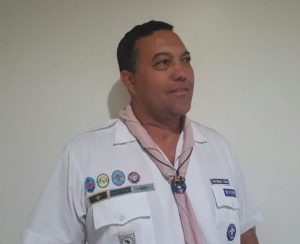 Nimmy joined the Scouting Movement in 1980 as a Scout with 1st Wynberg Scout Group. In 1984 he was awarded his Springbok and his Chief Scouts’ Award. When asked about what he remembers from that time he smiles broadly and says “I was 17 years of age and went down to the Sea Scout Base in Lakeside to do my Lifesaver badge. Back then it wasn’t as structured as it is now. Neville Coxon was my examiner and I already saw myself re-doing the badge – Neville had exceptionally high standards – and sometimes impossible to meet. He dropped a brick in the vlei and said – “Fetch it out”. It was a cold day and I went down there no less than 12 times. By the 10th time I was already literally dead. It was my last badge for my Springbok – so I decided to get the badge or die in the process. My lips were blue and body numb. Thanks Neville – God bless your soul for being so tough – I really feel that I earned my Springbok!”

As an adult Nimmy continued to serve the Movement as Troop Scouter for 1st Wetton and later for 2nd Plumstead Scout Group. Regionally Nimmy has also been giving back for many years, in 1999 he was appointed as Deputy Assistant Area Commissioner Scout Programme, in 2004 as Assistant Provincial Commissioner (Scout Programme Western Cape) and in 2010 became the Head of Adult Training for the Western Cape. In 2014 took on the role of RTC Adult Support for the Region.

Professionally, Nimmy started out as a teacher in 1988, teaching Phys Ed, Mathematics, Biology and Computer Studies and built his way up to be the youngest Head of Department his school had appointed. In 2003 he changed careers and entered the Call Centre world. He started by managing a sales floor to being appointed as Regional Manager Western and Eastern Cape and later set up a Financial Services Call Centre. In November 2016 he decided to step out of that field and to plough more into Scouting by joining the Scouting in Schools project. When asked how he balanced Scouting with a career and family life his reply was clear, “I am passionate about Scouting. I understand the value add that Scouting brings to the life of the youth. All my children have been and are Scouts – testament to my belief in Scouting. It is simply our way of life.”

In March 2017 Nimmy was appointed Chair: National Scout Programme. “I’m excited and anxious at the same time. It’s a huge responsibility with very demanding objectives that have to be achieved. We have achieved a great deal in SSA, but still have loads to do to ensure that Scouting reaches the areas where it is most needed. We need to ensure that youth in the impoverished areas also benefit from this awesome and powerful programme”, he explains. “In my new role I aim to ensure that the programme is accessible to all – not only the elite achieving upper advancement levels. I want to make it attractive to today’s youth – change the perception that its dated and for sissies – purple is the way to go! I also want to ensure gender equality – as per the constitution – we should not be discriminating between boys and girls – a paradigm shift is needed here.”

When asked if there something he feels Scouts should know about him, he smiles and says “They really know all of me! I’m not as strict as some of them tell the rest I am though.”