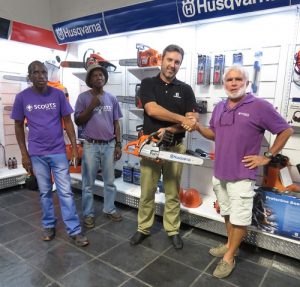 Cutters and Husqavarna recently supported the Hawequas Scout Adventure Centre in reviving its natural environment after fire ravaged through it. The Western Cape ‘Hawequas Scout Adventure Centre’ in Wellington sustained substantial devastation due to the fires that ravaged though the Drakenstein area in January. Instead of being defeated, Hawequas manager Kuba Miszewski saw this as an opportunity to enhance the biodiversity of the venue. “A Scout smiles and whistles under all circumstances”, he says referring to one of the Scout Laws. “We decided to clear the burnt areas, but also the surrounding areas of alien vegetation, therefore allowing new indigenous vegetation to flourish at the center.” 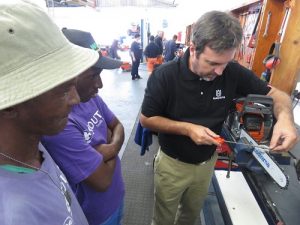 Hawequas – as commonly referred to by Scouts – is the premier camp and adventure venue for Scouting in the Western Cape. “One of Hawequas’s loyal supporters – Mr John Wilson – heard about the fires and the plans we had to turn the fire into something positive. He was aware that we only had one old chainsaw and so he contacted Cutters in Paardeneiland, the agents for Husqavarna, who were keen to support a project where alien vegetation was being cleared, where youth were given training in conservation and biodiversity and so the synergy was there!” explains Kuba. “Husqavarna decided to support our programme and donated a Husqavarna 346XP Chainsaw, the perfect machine for this sort of work, light enough to carry up the mountain and strong enough to work all day. Not only was the saw donated but the correct PPE for our staff as well the as training on how to maintain the saw was supplied” he adds.

“In name of Western Cape Scouting I would like to thank John Wilson, Husqvarna and Cutters for the generous support. Hawequas provides children and youth from rural, city center and disadvantaged areas the opportunity to learn about the importance of environmental conservation and to realise their own role therein”, says Western Cape Regional Commissioner Mr Paddy Milner.

For over 100 years SCOUTS South Africa (SSA) has been preparing children and youth to be independent people who are self-fulfilled and confident individuals and play a constructive role in society. SCOUTS SSA is currently one of the largest volunteer driven educational organisations in South Africa with over 190 000 child and youth members and over 5 000 adults nationwide who volunteer their time to empower South Africa’s children and youth in townships, cities and rural areas.