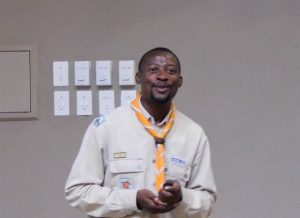 Bheki Sitole lives in Kamhlushwa, in the Nkomazi District in Mpumalanga . He has been an active Rover and adult volunteer for many years. We chatted to him about the Rover centenary and what being part of the Scouting Movement means to him.

“I was raised by my older brothers and sisters. Life was tough, we were poor”, he tells us. I quit secondary school in grade 11 to start working to contribute to the family income. I joined the Scouting Movement in 2001 and developed a passion for Scouting. In 2009 I went back to school and completed matric in 2010.  At the same time I went to courses so I could hold different positions in Scouting”, he says. “After I joined Scouting it developed from being a Movement for spending free time to a life for me. I follow the promise and the law to be a better citizen in my community and Scouting is my guideline ”, he explains. Bheki, being proficient in sports, took part in a soccer coach training, trained cricket at three local schools and obtained a trainer license.

Bheki is a member of the regional Mpumalanga Rover Crew. He started Rovering in 2004 and is currently an adviser/mentor for the Crew. “Rovering is so special to me because it gives me guidance, it plays a crucial role in my life. I can help people without expecting to get paid for it, I do not involve myself in drugs, I am too busy to get into something negative. In the township there are many bad influences and opportunities to get into trouble, Scouting and Rovering help me to be an example in my community. I have a good reputation and others follow me around.” 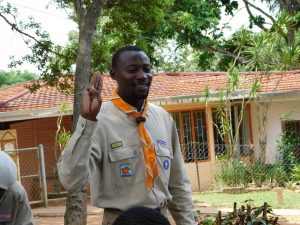 “Rovers are an international family, I have friends around the world. Except for one friend, all of my friends are in Scouting”, he continues. Bheki explores and experiences a lot with Rovers. “I’ve done many adventurous activities that I never dreamed of! We’ve been scuba diving, rock climbing, survival camping and went to local clinics to give service. We also used to be part of a drop-off center where we collected food donations. I have been part of many projects. One of the projects was a programme at secondary schools. We taught grade 11 and 12 students what career possibilities they have”, Bheki explains. “As part of that we had half an hour each week to tell students that there are a whole variety of subjects they can choose from. They should make their own decision and shouldn’t let themselves be influenced by anyone. That is why we also educated parents about it, maths must not be the only option.  We also built a much safer house for a very poor family which used to live in a clay house in Kamhlushwa”, he adds.

Not only service projects can improve a community. Bheki believes that by working on themselves the Rover Crew members became role models to others. “Being a Rover has challenged me to do things I would have never done. For example we did an overnight hike. We climbed on a mountain and we were not that experienced yet, we had limited food and no equipment. It started raining at night and all of us were wet and cold. We had the chance to go back the whole time but we continued until the next morning because of passion and ambition. That is so special and fascinating! I learned so much about life that night. If you really want to achieve, you achieve”, Bheki says.

Bheki’s life was changed because of Rovering. He has become a well-respected person not just in his community. His life is adventurous and he has made many friends around the world! “In Rovering everyone can realize and find out personal, special talents”, Bheki concludes.