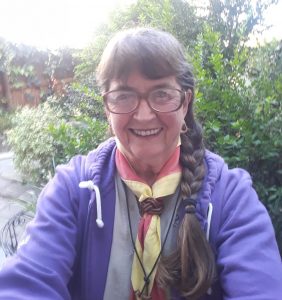 Arlene Johnson is a Wood Badge holder from the Western Cape Scout Region. She trained as a teacher and taught for 12 years, was co-ordinator of the Nederburg Auction for 20 years, was married for 49 years before her husband passed away. She has 4 children and 5 grandchildren and has lived in Somerset West, in the Western Cape, for 56 years. Here’s her story:

“In 1977 I volunteered my time to Scouting as a designer of visual aids! Soon I was roped in and in uniform and by 1980 had completed my Wood Badge and had taken over the Pack.”, she explains with a smile. “I was Akela for 32 years and then took a step back and became Chikai. Then I took on the role of acting DC for the Helderberg District for 6 years. I’m now retired from that, but still very involved with the 2nd Somerset West Pack as an APS and produce our magazine ‘Around Our Council Rock’.  After all these years I have many special moments but it is still so gratifying to see a father in tears at an Investiture as I had invested him in 1982! Also the children bring me joy. One little Cub asked his mother – who is one of our Pack Scouters –  ‘Mom, when you die, do you want to be buried or braaied?’

I feel that the values laid down by BP are just as relevant today as when he wrote them.  I know that I have become a better person because of Scouting and hopefully have passed that on to my children, 3 sons who all achieved the Leaping Wolf, but sadly only a few years of Scouting. One granddaughter who achieved her Leaping Wolf too. The incredible, dedicated adult leaders from far and wide that I have met have also added value to my life. My life would be very much poorer without Scouting.

I obtained my Wood Badge in September 1980 in Cape Town. I remember being extremely nervous of the training team!The most vivid memories though are of the fun we had!  We were allowed to bring the child out in us, but yet still achieved the serious adult side as well. The training team turned out to be fun-loving people who had us laughing till we cried. Donald Alexander was one of them – a more marvelous and dedicated Scouter would not be able to be found! Up to this day I still use the skills I learnt. There are too many to name but a few are: the ability to lay and light a good fire,  to tie up a parcel and know it won’t come apart, my 1st Aid Knowledge, being able to comfort a homesick child at camp, just being a good friend to all I meet, and hopefully, being a good example to others. I am constantly aware of the role I play in setting a good example especially when in uniform.  But, we must never forget that that example must be carried out when not in uniform as well. It is for LIFE!”

“DO YOUR BEST!  and  BE PREPARED! And the Laws and Promises. Covers everything in life.  I have lived with this in my life for 42 years now and at the age of 80 am still living these mottos!”