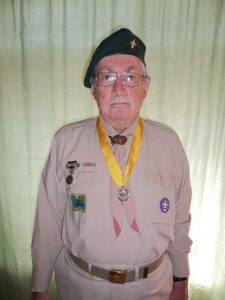 Our next Wood Badge holder to share his story is Godfrey Micklethwaite. Godfrey lives in a Retirement Village in the Gauteng suburb of Roodepoort, with his wife Cynthia. They have been married for 60 years and have 3 children and 8 grandchildren, of which 3 went to the World Scout Jamboree in 2007. Before he retired, Godfrey worked in the Administration Office of the Computer Section of Transnet. His main hobby is working on computers and playing table tennis weekly. His wife knits teddy bears for charity and also does card making. This is his story:

“I joined the 1st Maitland Sea Scout Group in the Cape Western Area as a Cub on the 26th September 1941 and then as a Scout I went to the 3rd Maitland Scout Group. Gerald Vlotman was my Scoutmaster and then later also became my brother-in-law. One of the many precious memories I have was when I was a Sea Scout in 1947. I had the privilege of wishing the UK Princess Elizabeth (now the Queen) happy birthday on her 21st Birthday at the Rosebank Showgrounds in Cape Town at the Scout and Girl Guide Rally to celebrate her birthday.

When I moved to KZN I joined 5th Durban Scout Group as a Rover and then supported a number of Scout Groups in the Durban County and South Durban Scout Districts. Whilst in Durban, I obtained my Scout Wood Badge. I was then transferred to Johannesburg by Transnet and the Near West Rand District Commissioner asked me to join his team as the ADC Special Duties in the District. Later I became the ADC Scout Programme and did the Cub Wood Badge and in the same year the GSM/Commissioner Wood Badge.  At the end of 1979 the DC retired and I took over as DC in the Near West Rand District for 5 years, after which I was the editor of the Transvaal Scouter. However, in 1994 I took over as DC again until I was asked to become Regional Commissioner of the Orion Region (West) in the Gauteng Scout Province. In addition to obtaining my Wood Badges, I also received the 60 years Bar to the Long Service Medal as well as the Order of the Silver Protea. I retired from Scouting on the 5th December 2004 on my 70th birthday.  My children and some of my grandchildren are still actively involved in Scouting which means that my children and family always greet each other with the left handshake!

When I think back to my Wood Badge courses I have a number of fond memories. Like when I did the practical Scout Wood Badge course at the Lexden Campsite in Pietermaritzburg. Allan Berry-Smith was the Course Leader and we were divided into 2 Patrols. Each one had to build a Skylon, which is a flagpole that does not touch the ground! Another memory that puts a smile on my face was when I did the 3 week theoretical GSM/Commissioner Wood Badge course. I did not sleep in and went home to sleep and made sure I was back early the next morning before the campers were awake. This was of course with permission from the Course Director, Jean Gobey.  At the end of the course I had not completed my theory and Jean made me sit and finish the work before she let me go home! She actually waited with me so that I could hand it in before leaving. The Wood Badge is the symbol of a trained Scouter and the courses give the holders thereof such confidence in their Packs and Troops. I always believed that we as Wood Badge holders don’t teach Cubs, Scouts or anybody. We actually train them in different skills. This is, to me, is the same as “learning by doing”!”

“I try to live up to the Scout Promise and Laws every day. I expect to pass this way but once, any good thing, therefore that I can do, or any kindness that I can show any fellow creature, let me do it now, let me not defer or neglect it, for I shall not pass this way again.” 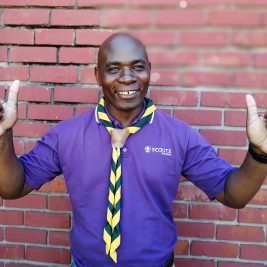