Paul Polta recently joined Jula Wolf at the National SCOUTS South Africa office. They are here as part of an international exchange programme where Scouts from Germany volunteer their services to the SA Scout Movement for a year. We sat down with him to find out more about this young man.

“I was born and raised in a town named Kehl, which is located in the Black Forest in the south of Germany at the French boarder. I’m an only child and grew up with my parents, grandparents and my dog. I like to spend my free time Scouting, reading, hiking and also acting. My mother is also a Scout leader. She joined after me because she was amazed by the Movement and we had a lack of Scouters at that stage. At first it was strange for me to share a hobby with my own mother, but now I realise that this has built a unique relationship.

I joined the Scout Movement at the age of seven. At the time I used to read a lot of Donald Duck comics in which his nephews Huey, Dewey and Louie were Scouts. I was so fascinated by the adventures they had! When I realised there was a Scout Group in my area I joined them and I haven’t regretted it since!
Scouting is not like a normal hobby. It’s a hobby that teaches values. We live in a world, which is divided for many reasons. We as the youth have the opportunity to do something against it. And especially as Scouts it should be our goal to change this, to change the future into a better one. The most special thing about Scouting is that all Scouts worldwide are somehow connected to each other. All of us stand up for the same values and that makes us unique.”

Paul is also a Scout Leader for “Jungpfadfinder“, being children between ten and thirteen years old. “I started to lead the “Jungpfadfinder” (the Junior-Scouts) because the Group needed more Scouters. But now, I would never change it! It’s an age group which is in an important stage of their development. To watch how the children grow physically and psychologically is just amazing! One of my favourite things to do with the youngsters is to try out new games and activities and see how they react to it and whether they have fun. I also enjoy going into the nature with them on hikes or canoeing – where they can improve their skills.”

Paul is also a Rover. “Rovering in Germany is a time in which you really start to organize yourself and your Group activities. It’s about getting in contact with other people your age and taking responsibility. One of my favourite Rover adventures – which takes place every year – is the “Rosskur”. It’s basically a big paper chase that takes place for 24 hours straight. During this time you have to hike from one station to another. At every station you have to accomplish some tasks, for which you get points. The team with the most points wins! They then have to organize the “Rosskur” the following year. At the end you will have been awake for nearly 48 hours and would have walked about 40 kilometres.” 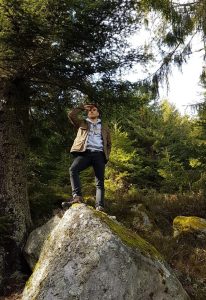 Recently Paul arrived in Cape Town to volunteer for a year. “I didn’t want to start studying directly after school. I wanted to do something I can identify with whilst visiting another country. When I saw the opportunity to combine the two through Scouting, I decided that was what I wanted. Also, Scouting is in my opinion a lot about international contacts and it’s a Movement that connects people all around the globe. I wanted to be truly part of that Movement and to learn from it. I hope that when the year comes to its end I can say that I spent my time here in a useful way and that others who came in contact with me can say the same about me. I hope that I can look back to a year full of new experiences and friends I made. I don’t want to be only a guest or a tourist, I want to have really participated.

I’m fascinated about the fact that the Scouts here are split in Air-, Sea, and Land Scouts. So the first thing that came to my mind when I heard about the Sea Scouts was that I would like to try sailing. Travelling is not my main goal but I would like to see some of the other cities, landscapes and things like the National Parks. My main goal is to get to know the country and its people. I also kind of like the idea to take in a few plays here too.”

When asked if there is something we should know about him he smiled and said “After arriving here, one of the first things I was told at the National Scout Office was that I speak very fast. I was asked if everybody in my home town speaks that fast too. So, I guess that’s definitely one of the things that is special about me. I speak fast and I like to speak!”