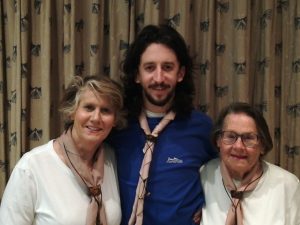 Earlier this year Nick de Klerk, Troop Scouter at 1st Greenside Scout Group, was presented his Wood badge. This made him the third generation of Wood badge holders in his family as both his mother Mary Gillett- de Klerk as his grandmother Colleen Gillett are Cub Wood badge holders.

Colleen served as Rikki-Tikki-Tavi at 3rd Pinelands Cubs in the Western Cape from 1969 to 2001. For a while she simultaneously ran the Pinelands Brownies. She was also the ADC Cubs for the Liesbeek District. “I did my advanced Wood badge in 1973 on the 25th Wood badge course in the Cape. All I can remember about doing the prelim in 1971 was having to write the answers to the questions on the right hand side page only so that remarks could be written on the blank page.  Also that very little sleep was had at the weekend camp at Gilcape due to the fact that we spent the time laughing so much. The Advanced Wood badge course was great fun as well. There were 21 of us on the course, Garnet de la Hunt, later Chief Scout, being one of them.  He had his Scout Wood badge and came on the Cub Wood badge to be able to support his wife Virginia who was running a Cub Pack. She attended it as a refresher. The course was crammed with Cub activities and ideas! On our ‘expedition’ we saw the old wagon tracks across the mountains at the top of Sir Lowry’s Pass and our special Pack meeting was “Shipwreck”.  We worked hard, but in the end we gained so much – and so did our Cubs. I made lifelong friends, many of whom I met again on the many PowWows I later attended.”

Colleen’s daughter Mary was Baloo at 3rd Pinelands Cubs and served as ADC Cubs for the Liesbeek District. When Mary and her family moved to Johannesburg she became Baloo and then Akela at 1st Greenside Cubs in 2002. “When I was 18 years old and had left Guides with my Founders Guide Badge, I joined Scouts as an Assistant Pack Scouter. I joined 3rd Pinelands in Cape Town as their Baloo where my mother was also an APS. Having done my Cub Instructors Course in 1976 and the prelim Wood badge course in 1977, I went on to do my advanced Wood badge. I vividly remember the coursework at the Bree Street headquarters, the buff files of notes, my written journal in a thick red bound book and the training weekend camps at Gilcape. I also remember the forms and Pack programme planning forms that were detailed and being tested on running a meeting!! In turn I got my scarf, woggle and beads presented to me on 26 September 1979 and joined the worldwide Wood badge holders group! As a member of the International Scout and Guide Fellowship I’m in touch with Wood badge holders around the continent and around the world.” 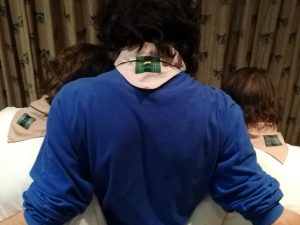 Mary’s son Nick was recently appointed Troop Scouter at 1st Greenside Scout Group and achieved his Wood badge. “Scouting has always been part of my life! In addition to gran and mom, my dad and my younger brother are both Springbok Scouts and my wife recently completed her BP Award. I became a Scouter in 2012 whilst I was still at university, and moved back to Greenside in 2013 when I moved back to Johannesburg. In 2018 I began my Wood badge as I prepared to take an even greater role in our Troop. The course itself was a fantastic opportunity to meet with other Scouters and swap ideas for activities, and debate and discuss our different takes on every aspect of Scouting. The theory we had to write up was thought provoking, and after much back and forth and debates and discussions and bouncing of ideas off of friends, family and fellow Scouters, I finally submitted my final write-ups and planning on Christmas Day. The practical (as always in Scouting) was memorable. The stripes camp I ran for my Troop was one of my favourite activities to plan, and our expedition saw us rowing boats down the Vaal river. All in all a very rewarding experience that allowed me to grow and has equipped me to be an even better Scouter.” 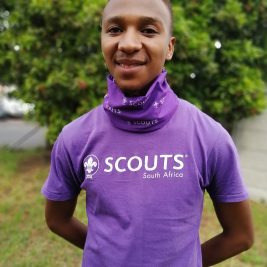