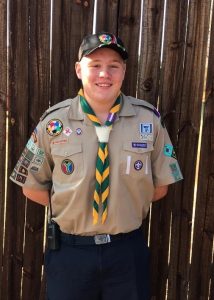 “Being part of the South African Contingent at the 24th World Scout Jamboree in the US was an amazing experience that I will never forget. Meeting up with everyone at O.R. Tambo International Airport on departure and seeing purple shirts and purple bags pouring into the airport was a sight!

On arrival in New York we took the last bus to Camp Alpine and had great fun at our campsite, despite the spiders.  After posing in our Scout uniform 1 and our camp uniform for “Group photo day”, the Eagles Patrol went on a hike around Camp Alpine with Jearoid our TS. We made our own tacos for lunch and then built gateways as Patrols. In the afternoon we voted for PLs and APLs and then those with artistic skills painted our Troop banner for the WSJ. The rest of us played sports and games.  Later the PLs and APLs were announced and given their stripes. I was nominated APL for the Eagles and Peder Kvevli was made PL. What an honour it was for me to have been nominated as an APL when I was one of the younger Scouts in my Patrol! The global ambassadors and flag bearers were also named. That afternoon the Americans were cooking a “barbeque” for dinner. We made sure to educate them as to what a “Braai” actually is. In the evening we all enjoyed a swim in the pool to cool off.

Part of our pre-tour included a trip to Six Flags and this was the best Theme Park I’ve ever been to! The rides are insane and there were so many different ones to choose from. I enjoyed the wooden roller coaster as well as a roller coaster called King da Ka which goes from 0-218km in 3 seconds which then goes straight up. After lunch, we tried out the indoor roller coaster and I forgot to remove my cap so waved it goodbye as it disappeared into the depths below. We enjoyed a full day at Six Flags and left late that evening to head back to camp.

The next two days were used to explore New York. We saw many places such as the Intrepid – an aircraft carrier that had jets, planes and even a space shuttle on it. There was also a Concord on the side of the ship, which I truly enjoyed as I am very into different types of aircrafts. We visited the 9 11 Memorial which is a sight to see. It is as sad as it is extraordinary. We met German, Mexican, Bolivian and Spanish Scouts there. We also went to Central Park, the Natural History Museum as well as Madame Tussauds. A must stop was Carlos Bakery (Cake Boss) and the top of Rockefeller Tower. In the evenings we ate dinner at Buffalo Wild Wings and Planet Hollywood in Times Square. On the third day, our last day in New York, we took Troop photos in front of the Intrepid before boarding the sight seeing boat to see Lady of Liberty and the Brooklyn Bridge among other things.

Then it was time for us to travel to Washington DC. After arrival and check in, we headed to the Hard Rock Café for supper. We met Finnish Scouts who were also eating there. The next day we visited the White House, the Boy Scout Memorial, Washington Memorial, Abraham Lincoln Memorial and the Vietnam War Memorial.  We then went to the Space and Aircraft Museum and met some Norwegian Scouts there. After dinner we explored some more of Washington.

The day had finally arrived, and we were heading for the 24th World Scout Jamboree! We were all up early and after a quick breakfast we went to the Capitol Building for a tour, after which our journey to West Virginia started. But, no journey would be complete without “Padkos” so we made a quick stop at Walmart to stock up for the drive. It rained most of the way and by the time we got to Benchel Summit Reserve it was dark and still raining, so we offloaded our bags and headed for our campsite. Our American hosts had very kindly pitched our tents for us, so all we had to do was add our stretchers and put our bags in the tents. We were given MRE’s for supper (Ratpacks) while they handed out our Jamboree scarves and name tags. 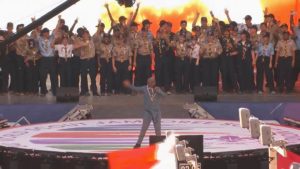 On the 1st day we set up our gateway, camp gadgets, built flag poles and rearranged the gazebos and tables. Then it was time to meet new people from different countries. The trading of badges, scarves, woggles etc. began! In the afternoon we set off to the AT&T Stadium for the Opening Ceremony where the South African Contingent were invited to be a part of the show with Lebo M, the singer of “The Circle of Life” from the Disney movie “The Lion King”. Lebo M had requested that the South African Scouts were on stage with him because his birth country is South Africa. We were backstage when Bear Grylls walked up on stage and we got to take a selfie with him which he then posted on his story on Instagram! We were all so excited after meeting Bear Grylls and being up on stage in front of 45 000 Scouts from all over the world! After the speeches, the Recycled Percussion performance and the spectacular Drone show, we were energized and ready to have lots of fun!

We woke up early the next few mornings and headed out to go rock climbing, scuba diving, and more. I attended different safety courses and a CPR course. On Cultural Day we played a couple of rugby games and beat the Australians, the British and later that evening we won against the Americans in a 5V5 game. The next day we hiked up Mount Jack, which was where the first Scout Camp was held in America. It was a long hike – especially in the heat – but we made it. We also joined the Spartan Race where we ran a mile-long obstacle course and for those of us brave enough, you got to do the second mile too. It really put you to the test and I was glad that I did it, it showed me just what I was capable of. That night I slept well. One of my highlights was when I got to try out White-river rafting, which was about 2 hours long and it was so awesome!

Before we left the camp we headed out for a bit of last-minute trading with those that still had some items to swop. Then Matthew Williams, Peder Kvevli and I headed out to ask Troops from countries that could not transport their tents home, if we could take it to add to the pile we already had. These were then transported home to donate to underprivileged Scout Groups in South Africa. 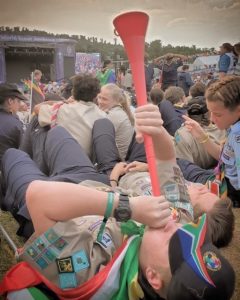 This was the most amazing experience of a lifetime. It has made me very humble and thankful for getting the opportunity to attend the 24th World Scout Jamboree. Being an APL was also a huge achievement in my books. I would like to thank everyone that helped me get to the WSJ, whether it was a donation towards the trip, buying honey from me or giving me moral support. Mostly I want to thank my parents and my brother who supported me all the way through, Thank You. To the Scouters who worked so hard putting this trip together and to those that got to keep their eyes on us all the time, thank you, you did an incredible job!

If you are thinking of attending the WSJ in 2023 here is my advice “Start saving now and plan ways to earn the money to get there”. I will remember all I have experienced for the rest of my life and I am sure that the friends I made on this trip will remain my friends forever. We have so much in common being part of the Scouting Community, even if we don’t speak the same language.”