adventure,
/ədˈvɛntʃə/
noun, an unusual and exciting or daring experience.

The 24th World Scout Jamboree, a dream that was pieced together through tons of planning and a bunch of Scouts, a dream that was made into reality. I must admit even after seeing all the adverts and YouTube videos, I really didn’t anticipate what to expect. In my mind it was just another camping competition, another Gordon Shield (annual Western Cape Scouting competition) filled with rainy days and STAs. BOY WAS I WRONG!

So, let’s start from the beginning, shall we? 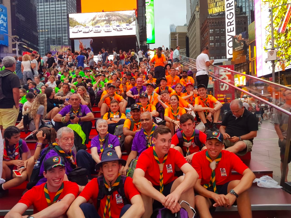 Not many of you know of the journey it was to get there, the clambering through the plane, the various camera flashes taken throughout the night, and the never ending games. Once we exited the plane, we were set for a long bus ride all the way to the shake down camp. When we got there it was definitely worth the wait! All I can say is that there was a FORT with flags and everything, and a dining hall and a POOL! So while at this magical place we did a multitudinous amount of activities.

Finally Washington! A place of democracy and order! We spent our time shopping, rocking out in Hard Rock Café and taking in the sites while wandering around.  We also jammed out at dinner singing to Mamma Mia at the top of our lungs!

Two days later and we were on the bus ride to adventure. That was when it happened, when we heard it, the pitter pattering of rain on the bus window! Oh hot flaming Cheetos we were in trouble! Rain could only mean wet, muddy tents, which of course we would have to set up in the rain. I like mud just as much as the next person but sometimes having a semi-permanent mud bath in the middle of your campsite can pull down the spirit…. just a tad. But our American hosts came to our aid and we were saved from having to set up in the rain. Whoohoo go America! We arrived to a perfectly pitched campsite!

After a lovely night’s sleep we started our first day at Jamboree by realising how hot it could get! I went to my first official global ambassadors meeting and then, well .. skip ahead to the opening ceremony! The walk there was rather quiet and only the sound of our South African flag fluttering in the wind disturbed our silence… SIKE!!!
The crowds were roaring! Countries from all over the world dancing, a rainbow of different coloured flags, scarves and excitement and I was sure my eardrums were to burst as we, the ambassadors, carried down the many different country flags while our South African team danced majestically up to the stage with Lebo M leading them in a song from the Lion King! We got to meet our mascot which was a giant bear that had a REALLY large scarf and we saw Bear Grylls who jumped down like only he could and started talking passionately about how Scouting helps lives and is a great way to live. What an amazing experience and this was just the start of our epic journey! 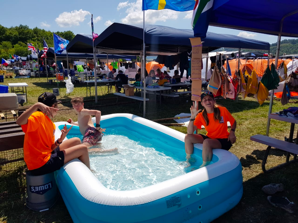 On the the first official day of jambo I woke up really early in the morning only to get lost! When I finally stumbled across my destination – the big zip which was actually really hard to miss… – I screamed all the way down like crazy and I almost collapsed on the second platform from excitement. So yeah… I can confirm it was cool and I did survive to tell this tale. Apparently it reaches speeds of 81km/h. I then trudged my way back to camp with a new friend I had made all the way from Italy… only to find half the Troop chilling in an inflatable pool in the MIDDLE OF OUR CAMPSITE!  While I was gone, the Taung leader proudly revealed that they had brought it along.

Since the Jamboree was such a long and eventful experience, I’m just going to include some of my highlights. Okay, so there was this village that included all the cultures and sold food from their countries. It was literally the happiest place of the jamboree! If you were hungry, you went there. If you wanted some free stuff, you went there. If you needed a new friend, you were there. It was a never ending cycle of happiness, I loved it and I miss it and I wish it were my home. Just next door to this fabulous place, was a trading centre where a Scout could try their hand at trading badges, scarves, etc. Other activities included the water obstacle course with a Wipeout course which really scared you in the process. I also climbed up Mt Jack , did the Spartan race and learnt how to skate on the 2nd biggest skate park in USA.

There was also a Cultural Day where all countries could represent who they were. The South African Scouts being the way we are, we did the only logical thing…. challenge the Aussies to a rugby game and create a movable spaza shop! I have to say the Aussies really did scatter as Rique charged at them. Our Rooibos tea proved to be a firm favourite amongst the visitors, but as temperatures were high we served the tea cold and clearly this was a hit! Another one of my favourite moments by far was when Broadway sang Disney songs – I am addicted to Disney songs! Oh yeah now this was my jam! 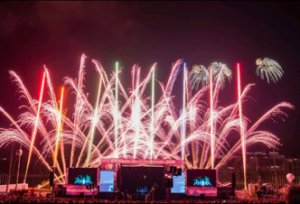 It may be important to mention the amazing friendships that were formed on this journey. So when the final closing ceremony took place, it was time to say goodbye. We definitely did go out with a bang! That night the fireworks lit up the skies and Pentatonix came in and sang the best acapella we had ever heard. Light Balance did some wicked dance moves and they really did light up the performance.

This has truly been a magnificent journey. I am truly grateful to the SA Scouts, the Scouters and everybody that made this experience possible. Thank you for making this an unforgettable memory and an adventure of a lifetime.