Over 200 families in rural communities in Mpumalanga have received humanitarian aid in the form of food parcels through a partnership initiative with the DPSG Fulda Scouting Province, former SSA volunteer Marvin Raussen, SA Rovers and Deputy Chief Scout Khonzaphi Mdaka.

“My parents were development workers and for the first 10 years of my life I lived in Africa. Even though I am German, Southern Africa is part of who I am. In 2015 I had the opportunity to volunteer at the Mpumalanga Scout Center”, explains Marvin. “Since my return to Germany there is a formal partnership between the Mpumalanga Scout Region and the DPSG Fula Province where I am a member. I was on my way to South Africa to discuss projects with Deputy Chief Scout Khonzaphi Mdaka when the COVID-19 lockdown came into effect. So I picked up the phone and asked him “What do you need?” He spoke to his team and initially we were going to provide water tanks to people in remote areas to make it easier for them to access water, as they often have to walk for hours to get some.  When the SA government took steps to remedy that, the project was changed.”

“I asked our Rovers and District teams to check in with our Scouts, local churches and the COVID-support structures in place to see what the greatest need was”, elaborates Khonzaphi. “It quickly became clear that people are hungry and that we needed to help where we can to provide food to vulnerable families. We received a list from local authorities of families in dire need and then looked at where they reside and what their cultural food requirements were so we could pack food parcels that would sustain their families for a month in line with what they are accustomed to eating. Therefore the food parcels varied per district.” 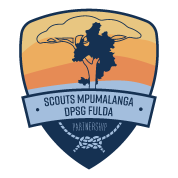 “In order to purchase these food parcels we needed to raise money”, continues Marvin. “It had to happen quickly as people were suffering. The DPSG Fula Scouting leadership jumped into action to help me raise the funds needed and to send it directly to the Mpumalanga Scouts for the project. I also started a crowdfunding page on Betterplace.me, as there were people who wanted to donate with PayPal and we didn’t have those facilities. I shared the campaign on DPSG Fula and my social media pages and sent emails to nearly everybody in my address book. The response was overwhelming! Even people that have never met me donated to help families in Mpumalanga as they realised that the totality of the funds would go straight to where it is needed. We exceeded our target 3-fold! I was totally speechless. I truly love South Africa, its people, cultures, nature and the way people still come together to talk and to spend time together. I’m so grateful to all who supported this project and to Khonzaphi for giving me the chance to be of help when it is needed” adds Marvin. 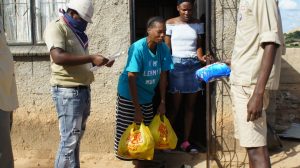 “With the financial aid we received over 60 Rovers in 6 different Districts – ranging from the East and Hazy Districts to Nsikazi, Nyamazane and the greater Nkomazi communities – were able to provide 210 families with food parcels in May, and 120 more families will receive support in the coming two months,” explains Khonzaphi. “Our approach was slightly different to other initiatives as we took the food to the people . We obtained our essential service permits, ensured that the necessary safety precautions were in place and then our Rovers organised the shopping, the packing of the food parcels and the transport to get it to the families identified. Many of our Rovers live in the communities they served and face similar challenges, yet they stepped up to help. 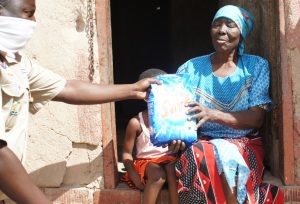 I had the privilege of accompanying some of our Rovers when they delivered food parcels in the East District. I was truly humbled when I met an old grandmother who lived with 6 children and who was totally overcome when she received our support. She had not expected to get help, was not able to go out to pick up food aid and was in such big need of food for her family. She was crying out of relief and at that moment I felt so humbled and honoured to be part of the Scout Movement which has allowed me the privilege to be of service and assist. I am so impressed and proud of how our Rovers have stepped up to help and I am very grateful to Marvin, our partners and all who donated.” 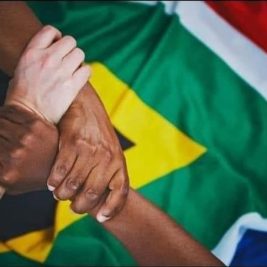 Be Messengers of Peace within your communities
Read More
Scouts Wiki