Ahmad Solomon is known for his drive to empower and up-skill youth from disadvantaged communities.  Since 2016 he has been the coordinator of the Western Cape Scouting-in-Schools programme.

“I was born into a family where giving back was the foundation of what we believed in”, explains Ahmad. “My dad was the chairman of the 1st Wetton Scout Group and in 1987 I was invested as a Cub. As a family we were very involved in the Group and organised a lot of community service activities. My mom used to teach us that success is not displayed by the wealth one has, but by the impact you have on the lives of others.

Success is not displayed by the wealth one has, but by the impact you have on the lives of others.

After I matriculated I studied at the University of Cape Town. Then I got married and have four beautiful children. I’m not sure who was more excited when my two older kids joined the 1st Wetton Cub Pack, my children or myself? Both my children obtained their Leaping Wolves. As an eager parent it is clear that I was quickly recruited and sent to Adult Leader Training, after which I became an Assistant Pack Scouter.

At Akela 2016 I met our former Chief Scout Sibusiso Vilane. I was listening to his life story whilst sitting around the campfire and started re-evaluating whether I was doing enough to give back to others. I serve on the governing board of my children’s school Muhammadejah. We were reviewing the school activities, particularly for girls. To my excitement the school gave consent to register a Scout Group at the school. My wife became the Pack Scouter of the 1st Muhammadejah Scout Group and history repeated itself as my entire family was committed to giving back to the school and its neighbouring community. 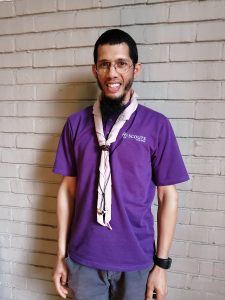 The same year the Western Government – through the departments of Education, Culture and Sports’ Game Changer Programme – partnered with the Western Cape Scout Region and started Scouting-in-Schools (SiS) in low to no fee paying primary and high schools. I applied for the job which would take up a few hours, little did I know it would take over my life… and truth be told, I am grateful it has. We started off with no schools and a small team. In January 2017 we trained the first 15 SiS intern leaders and then sent them to schools in Gugulethu, Khayelitsha and Steenberg. To date we have trained over 200 interns who are active in over 30 schools and serve over 1500 children. They receive the same training our Scouters, but in a more concise time frame. We also run weekly mentor-ship sessions where we evaluate how the week went, and prepare the programmes for the week to come. This ensures that the participating Cubs and Scouts receive quality programmes and get the same opportunities to learn by doing.

The young interns are unemployed youth aged 18 to 25. They all join us with limited knowledge of the Scout Movement and most don’t have any work experience. By training them to be Scouters and providing them with weekly personal development sessions, I have seen the value our programmes add to their lives. We give them responsibility, which means they learn to interact and run programmes with children whilst living the Scout Promise and Laws. We also host SiS Cub fun days that the interns need to organise. They learn how to organise the logistics, how to communicate effectively and general project and time management. In doing so, they overcome their fears, gain confidence and see that they are capable of achieving great things. The interns have also been judges and participated at Kontiki, Upton Shield, Gordon’s Shield and a number of District and other Regional events, which helps them see that they are part of something bigger.

It is rewarding to know I’m making a difference and helping them. In life you make sacrifices for the greater good and my family also gets to see that my time away from them is to give hope to youth. I see myself as instrumental by being meaningful.”