The last 8 months flew by so quickly. With so much happening every day, distilling them into a couple of words seems impossible. That being said, I’ll do my best!

Last year August I arrived in Cape Town. That was the first time I traveled on my own, my first time in South Africa and my first time so far away from my family and friends in Germany – and for almost a year. In the period that ensued I went from being so nervous and shy in the beginning, to being so happy and confident in the end. I learned so much about myself and I am so thankful to everyone who supported me!

But I didn’t only learn things about myself. I got to know so many amazing people, experience different cultures, and see the beautiful piece of nature that is South Africa! I also gained so many office and Scouting skills, improved my English and even learned a bit of Xhosa and Afrikaans! However, the biggest lesson I learned is that you can have more than one home and, for me, I found my second home in South Africa – in Cape Town.

Most of my time in Cape Town I spent at the National Scout office and with the Scouting-in-schools interns. When I think of Paul and I arriving in the mornings, knocking at the door and someone knocking back from the inside, the coffee breaks, the hours we spent in the shop and the discussions we had – including as to whether I should answer the phone, I realize that these small moments made me feel at home. 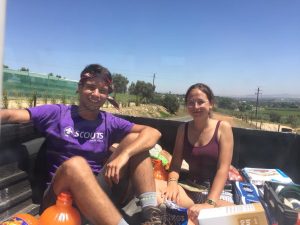 But I didn’t only work in the office. The Scouting-in-Schools project was one of my favourite projects of SCOUTS South Africa. Through the programme I was able to experience Scouting in a very different way compared to Scouting back home. Some of my best memories were made on the Table Mountain hike with the new interns at the beginning of the year and at the Scout Adventure Center Hawequas. We helped at the eco-camps, where I spent most of the time in the kitchen. I always had a lot of fun with the other volunteers, teaching each other some words in our mother tongues, cooking, making jokes and obviously assisting in training the interns and preparing the meetings.

Sometimes we also got the opportunity to visit the township schools, for example for the Cub fun days. It was so amazing to see how the interns managed to run a programme with so many kids at a time and so little resources. I was so impressed! 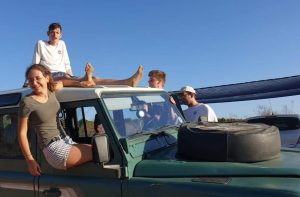 And then there was my host family – the Le Jeune family who gave me a home during my time in South Africa. I will never forget the dog walks in the park or on the mountains, the pizza nights on Thursdays or the unique sound of the Landrover. Being a part of the Bendali-family was so much fun and I am so thankful for their warm and welcoming atmosphere that made me feel at home.

Jula and Rovers from 6th Rondebosch

Scouting also gave me a home. I was part of 1st Claremont Scouts, 2nd Rondebosch Cubs and 6th Rondebosch Rovers. All these Groups made Scouting so special and shared so many funny, beautiful and adventurous moments with me. The first things that come to mind are sailing with the Rovers, the hike in McGregor with the Scouts and the trampoline park where we went with the Cubs. I could not think of a better Scouting-family!

In addition to the Scouts from these three Groups I met so many Scouts at competitions, courses and other events. It often felt like I was a full-time-Scout and I guess this is what made my time in SA so special for me. Thanks to everyone who made it possible for me to spend so many hours in Scouting by inviting me to Springbok ceremonies, competitions, camps, Troop meetings, and District events. Through all these events I made so many friends, with whom I loved spending my free time with. It is great to look back on all the outings, hikes, parties and every small moment we got to spend together.

Although the time got cut short and we missed out on so many things like PLTU or Kon-Tiki, already planned holidays, and so many more adventures, I really appreciate every South African experience I got. Now that there is so much that we did not do, it gives me even more reasons to come back to Cape Town, to you! 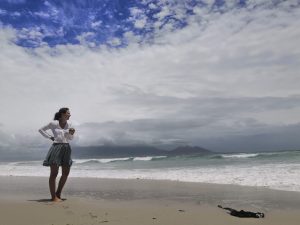 The sudden goodbye was so hard and I think it was the most emotional thing I have ever experienced but the last days and hours in Cape Town were still some of the best. Those moments showed me how lucky I was to get to know you all and to have made such wonderful friends. You have a place in my heart!

Stay safe, especially in these hard days and always be prepared!

Yours in Scouting,
Jula