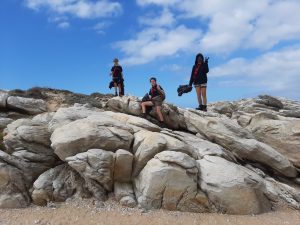 Josephine Jacobs, or Jo as we call her, is the Patrol Leader of the Elephant Patrol at 1st Walmer Scout Group located in Gqeberha. I spoke with Jo about the beach clean-up she organised with her Patrol and got her perspective on the importance of keeping our beaches clean and plastic-free.

“Earlier this year my Patrol members and I began a 20km beach clean-up from Something Good all the way down to Secrets Beach. My Patrol worked extremely hard and managed to collect roughly 120kg of rubbish on the first day and nearly 75kg of rubbish on the second”, explains Jo proudly.

“Strangely enough the most common litter we found were small sweet packets, they were everywhere! But less strangely, and a close second, were fishing gut and disposable masks. We noticed that these two were rather big ‘killers’ so to say, as they are often unseen and are eaten by marine life or end up strangling them. This is why it’s very important to dispose of masks correctly and cut off the straps!” explains Jo. 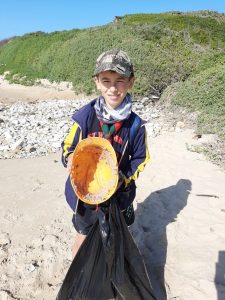 Jo and her Patrol advocate strongly for the importance keeping our beaches clean by reducing our plastic consumption and recycling our rubbish. “I think it goes without saying that it’s important to reduce, reuse and recycle. Much of the rubbish we collected from the beaches could’ve been recycled instead of dumped. Much of it needn’t have existed in the first place and then would not have ended up on our beaches. It is seriously essential that we do our best to drop the production of plastic, there’s enough! If we re-used and recycled plastic materials instead of made brand new ones, we’d live in a much prettier, healthier world”, she states. 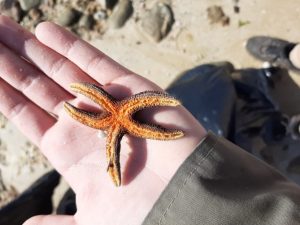 “The clean-ups helped us realise that many people aren’t aware of the amount of litter on our beaches. They don’t see it and thus, it piles up, resulting in the destruction of oceanic flora, and the deaths of many marine creatures such as birds, sharks, seals and otters. It’s our duty as Scouts to defend and protect our environment and everything that lives in it. As the 6th law says: ‘A scout is a friend to animals’, so even if we can go out for only a weekend to clean our beaches, it’s worth it and it’s a wonderful feeling to look back at the beach you’ve walked along and to see it free of pollution.”

The Elephant Patrol is an example of how Scouts are creating awareness around the issue of pollution and making a difference by cleaning up their community. #promisetotheplanet #scouts4SDGs 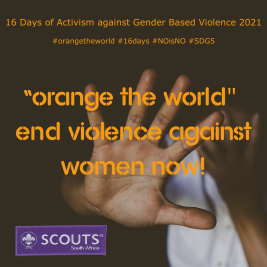