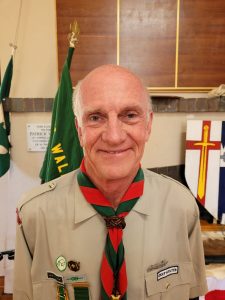 As we commence the new Scouting year we hear from Jeff Ferreira, RTC Adult Leader Training for the Eastern Cape South Region about his own Scouting journey and his plan to empower and support adult volunteers in the Region.

“I started off as a Cub in the ’60s”, explains Jeff with a smile. “I was nine years old and my parents saw an advert in a magazine for kids to join Cubs, so I joined Cubs at St Heughs Church in Port Elizabeth, now known as Gqeberha. I went up to Scouts when I turned eleven and then transferred to Scouts at 1st Walmer Scout Group, where I, later on, became the ATS. A few years after that the Troop Scouter left and I took over the Troop for seven years.”

In all his years he has been involved in Scouting, Jeff has been in various leadership positions in the Eastern Cape Region, as well as in KwaZulu-Natal. “After being the Troop Scouter, I took over as the Scout Group Leader for 1st Walmer. Thereafter I progressed to the position of DC for Eastern Cape South and was the Rover Commissioner for about a year before I was transferred to Durban. In Durban I became the DC, and in my last year there I was the Rover Commissioner for KZN. When I moved back to the Eastern Cape I re-joined 1st Walmer as the Scout Group Leader and at the same time supported the Regional Team with training for over five years.”

It’s that good feeling you get when you see these kids do well.  You see them achieve and you feel a sense of pride.

Having been involved in Scouts for over 54 years, I wanted to know what kept him motivated to stay involved and to take on such a kep role in our Region. “It’s always been fun. As an adult, the fun thing is watching children develop and grow. It’s that good feeling you get when you see these kids do well that has kept me motivated. You see them achieve and you feel a sense of pride for them. In this process you also experience personal development, you learn so much as an adult through Scouting. You can’t stay in one role forever though, you need to constantly keep changing. It’s best to move on into a new role when you feel yourself getting stale. This gives you a whole new lease on life, you have new goals, challenges and fun. You become revitalized, and that’s what keeps you going.”

When asked what his goals are as RTC Adult Leader Training, his answer was clear: ” I see the need to get this Region up and running again. It’s not going to happen without training, so there is a desperate need to get adults trained. Scouting has always been my passion and I would hate to see it collapse. Training is essential for adults in Scouting to progress and take on larger positions. While we have a bit of a spark, we need to rekindle the flame instead of trying to start from nothing. I aim to form a team of trainers and get all the Scouters in the District trained for the roles they’re in, as well as training new Scouters. These are the most important goals at the moment”, he concludes.

We look forward to seeing our Adult Leaders in the Eastern Cape South Region thrive! 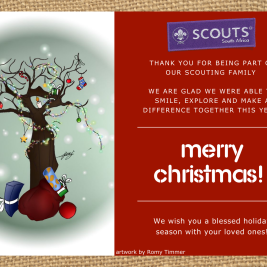