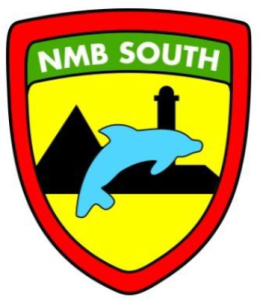 Badges are part and parcel of our Scout programme, but also help us create a visual identity for our Scout Regions and Districts.  Today, the Eastern Cape South Region’s Nelson Mandela Bay South District (NMB South) are introducing their 1st District badge.  The search for the design was run as a competition. I spoke to competition organiser Caroline Boshoff and Morgan Schroder who created the winning design.

“When we started advertising for the new District badge we realised that many Scouts did not even know the name of our District, Nelson Mandela Bay South. The introduction of the badge acts as a reminder and gives a sense of belonging to our District’s Scouts, Cubs and Rovers” explains Caroline. ” It is the first District badge in the Eastern Cape South Region, and we certainly hope that this would also inspire Scouts from other Districts to design their own District badges too. We are confident that the badge will contribute to uniting Scouts and making them feel that they are part of a community, their District as well as their Scout Group.”

When asked how the idea for the competition came about Caroline smiled and said: “It all started when I was a Scout and went to PLTU (Patrol Leader Training Unit) in Cape Town in 2017. I noticed that the Scouts from Cape Town all wore badges I had never seen before. They told me that their badges were District badges, showing which Ddistrict they come from. At the time I did not know that years later I would organise a competition for my District to have our own badge. When I joined the 1st Walmer Land Rovers, having to have started as a Cub at the age of 9, under the Algoa Sea Scouts, I knew that I wanted to organise a project that was inclusive. I reflected on my PLTU experience and decided to work on a project for a District badge. I spoke to the District and the Regional Commissioner and that was how the idea of the competition came about”.

“We had 28 entries with three Groups that participated, the Algoa Sea Scouts, 1st Walmer and St Croix Sea Scouts” continues Caroline. “It was very important for the competition to be inclusive of the whole District therefore we received entries not only from Scouts but also from Cubs, Rovers, Adult members and parents of Scouts.”

Competition winner Morgan is proud to have contributed. “I tried to do my best and put thought and effort into the design, so I was hoping the judges would like the design. It includes many heritage and historic symbols from Scouting, past Eastern Cape South Regional badges and our city, Gqeberha (Port Elizabeth). I feel proud that we could incorporate these into our NMB District badge. One such symbol is the dolphin. It represents helpfulness and guidance. Blue is a primary colour and the colour of the ocean and the sky. This colour often symbolises serenity, stability, inspiration, wisdom or health, it can be calming and emphasises reliability.”

“Nelson Mandela Bay Scouting, like most of our beloved Movement, was strongly affected by 2 years of pandemic. At the start of 2021, Group sizes were at an all-time low and EC Scouting was struggling. In the past 2 years we have seen an incredible revival of passion and enthusiasm from the Adult leaders which has in turn attracted numbers of new Scouts to the Movement” adds Alex Jenkins, NMB South District Commissioner. “Group numbers are increasing, and we are having a ball. The upliftment has been strongly driven by the amazing Rovers that we are privileged to have in our District and by the new Regional team that is helping where possible. By doing several activities together, (Kontiki, LDC1 and 2, survival badge weekend and our District night hike) we have shown that Scouters and Scouts are not alone in their small Groups but are able to reach out and join with others and share their love of Scouting. The new District badge will bring the whole District together and I am very excited to wear it with the rest of my fellow Scouts”.

As our country celebrates Heritage Day today, which coincides with “National Braai Day’, the launch of the new badge will be a big celebration that will include a braai! “I believe the launch of the District badge will bring more unity to all Scouting members from the Nelson Mandela Bay South District”, concludes Caroline. 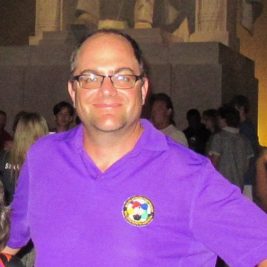