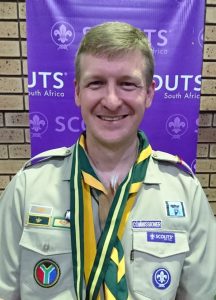 Dr Hausberger was previously SSA’s Chief Commissioner, Gauteng Provincial Commissioner and served on Exco. He has been an active and dedicated adult member for over 20 years and has worked to empower children and youth through Scouting. Brendon has also actively participated in the training and development of adult volunteers. When not at Scouting, he carries the pursuit of leadership and environmental awareness into his work environment. He is the CEO of Holland and Hausberger, a South African engineering firm with a particular focus on providing energy and fuel needs through renewable and energy efficient applications. cs@scouts.org.za . Read more here.

Mr Khonzaphi Mdaka joined the Scouting Movement in 1994 in Mataffin. In 2000 he became Deputy Provincial Commissioner and two  years later he took on the role of Provincial Commissioner. In 2011 he was named Provincial Chairman and was also elected at the National Scout Council to serve on Steercom which oversaw the revitalisation of Scouting. More recently Khonzaphi stepped into a National position as the Chair: SSA Properties. He made big strides in consolidating SSA’s properties and developed effective property management and maintenance tools.
As the Deputy Chief Scout Khonzaphi wants to contribute to the growth of the organization. “I want to contribute to the creation of a sustainable youth organization where class has no space like we see in third world countries.  I want to contribute in making Scouting a symbol of life for the young people of our country and the world we live in.” Khonzaphi graduated at the Madadeni Technical College in Electrical Engineering. He joined Halls as an assistant electrician and is currently a Project Manager. The journey wasn’t easy, but the character and ability to overcome challenges is something Khonzaphi attributes to his life within the Scouting Movement. 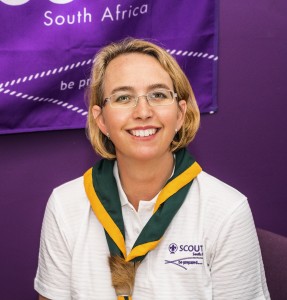 Milly Siebrits has been leading the way for SCOUTS South Africa for the past ten years. Initially as the project manager and since 2007 as CEO. She has been instrumental in spearheading the revitalisation of South African Scouting in order to ensure a holistic approach to youth development and to address the current societal and environmental needs. ceo@scouts.org.za  Read more here. Gary Pienaar joined the 9th Pietermaritzburg Cub Pack along with his younger brother, shortly before his 10th birthday. He achieved his Leaping, his Springbok and the old Chief Scout’s Awards. Over the years he has served in Group, District, Regional, Training and National roles. He has also served on the Scout Board.

Gary holds a B. Com degree from the University of KwaZulu-Natal, an MBA from Stellenbosch University and was awarded the Old Mutual Medal for exceptional academic achievement. He has held various commercial positions and currently works for Tiger Brands Limited, and has experience in both business unit and group management roles. Mr Pienaar has 3 sons and resides in Johannesburg.

Mr Cameron Belling joined the Scouting Movement in Durban in 1998 as a Cub. Six months later he moved up to Scouts at the 4th Durban St Thomas Scout Group . Cameron grew through the ranks within 4th Durban St Thomas, from Assistant Patrol Leader right up to Assistant Troop Scouter. In 2006 he was invested as a Rover after which he took up the role of Crew Chairperson. He then moved to the SIGMA Rover Crew and in 2010 was appointed Rover Scouter. On a Regional Level, Cameron volunteered in a number of roles ranging from KZN RAC Chairman to RTC Rovers. The KZN training team appointed Cameron as an Assistant Leader Trainer in 2013 and two years later he was appointed Leader Trainer. In 2016 he became the Contingent Leader for the 15th World Scout Moot and was appointed as the National Rover Programme Chairperson. Read more here. 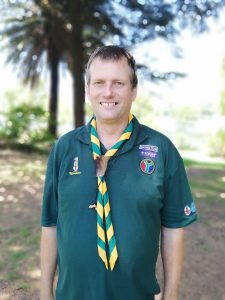 Mr Craig Rens has been an integral member of the Meerkat Programme development team. Craig joined the Scout Movement at 7 years old and holds his Leaping Wolf and Wood Badge. He has held various positions within four Scout Groups. The Law & Promise have always been a measure in his life and also while working in the bank and church. ““Meerkats came out of a need for a quality programme for children of ECD age. Its main focus is to develop helpful, well rounded young people and it provides an opportunity for parents and children to learn through play together.“  Read full story here. 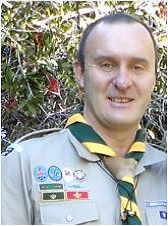 Mr Gerard Evans brings a wealth of experience to this role, having held similar positions in the Gauteng Region and on the National team before. He was also extensively involved in developing the Rover programme, after which he played an integral part in testing and launching the current ‘Entsha’ Scout Advancement Programme. Gerard is a
geologist by profession, specializing in resource geology. His wife Tanya and daughers Megan and Sarah are also in the Scout Movement. 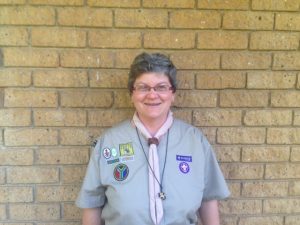 Ms Jeanette Angus is a very busy payroll controller at a huge retailer. Jeanette volunteers all her spare time to the Scouting Movement. She joined the Scouting Movement in 1980 at 1st St Francis in Yeoville as a Pack Helper.  For 36 years Jeanette has worked relentlessly to help Cubbing grow in South Africa. “Our aim is to develop children holistically; to become independent, healthy, happy and helpful individuals. Through the Cub Programme, which is aimed at the balanced development of each child, we provide ample learning opportunities through the play-way method.” Jeanette recently stepped into a new Scouting role as Coordinator Better World Framework. Read more here.

Mr John Sturgeon has served as Chair of the National Finance Committee since 2018. Simultaneously, he has been Gauteng Treasurer / Regional Finance Representative since 2010, as well being responsible for the property portfolio. From 1997 to 2005, he was a member the National Finance Committee. John is a qualified Chartered Account and was Group Executive – Corporate Finance and Capital Management within the Liberty Holdings Group for 15 years.  He consults to Liberty Holdings since retirement, responsible for Corporate actions in Africa amongst other responsibilities. John has held various Financial Directorship positions including Argus Holdings Limited and the Premier Group Limited. For recreation, John enjoys cycling.

Mrs Joy Hutchinson hails from a family of Girl Guides and therefore understood the fundamentals of both movements from a young age. In 1997 she joined the Scouting Movement as a Pack Helper with 9th Benoni when her eldest son became a Cub. Shortly afterwards she was invested as an Assistant Pack Scouter. Since then Joy has held a number of roles ranging from Pack Scouter and East Rand ADC to trainer and now lead trainer in Gauteng. Since 2014 she has been a SSA International Committee member and has now taken on the role of Chair: National Adult Resources. Joy holds a Certificate of Merit and a Long Service Medal. Professionally, Joy has had a successful administrative career in multiple finance and HR departments in the corporate field. She has a secretarial diploma and has studied part time through Unisa majoring in education and psychology. Read more here

Kevin Trollip spent his teenage and young adult years in the Scout Movement in the Cape Midlands. When his son went up to Scouts in Sandton District, Kevin stepped back into uniform. Since then he has held various Adult Leader roles at Group level, attended international Scout events including World Scout Jamborees. In 2008 Kevin and his family donated 20 hectares of their farmland to the Mpumalanga Scout Region to serve as the Esangweni camping and training ground. Kevin has built a successful career in corporate finance sales, healthcare fund management and is currently involved in sales of equipment to property developments.

Lawrence Stanton hails from Johannesburg and joined the Scouting Movement in 2003 at the 1st St Peter’s Cub Pack. He later joined the 1st Rivertrail Scout Group where he engaged in many Scouting adventures until he relocated to Cape Town to study. After moving down from Johannesburg Lawrence decided to give back to others what he had gained through Scouting and joined the 6th Rondebosch Scout Group as an ATS. Lawrence currently lives in the Western Cape and is studying towards his Bachelor of Science in Engineering in Mechatronics at the University of Cape Town. lawrence.stanton@scouts.org.za Read full story here. 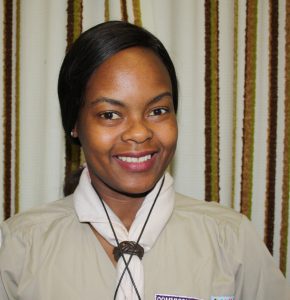 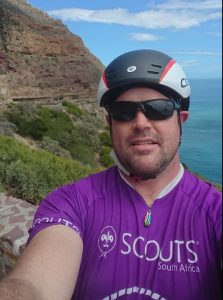 Peter Statham’s passion in life is the outdoors, adventure and communication through innovation and excitement. Peter has a diploma in Marketing from AAA School of Advertising and has extensive experience within the outdoor adventure industry. He has been in the Scouting Movement for many years and has great insights into how to approach and reach members of our various Scouting branches.  Peter previously founded TWI (Teamwork Through Innovation) nd is currently the Operations Manager for Waterfront Adventures and Cape Shark Adventures. 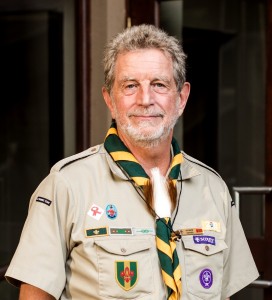 Mr Andrew Tanner grew up in Scouting in England. In South Africa he was Group Chairman, Troop Scouter, and Assistant District Commissioner, before devoting his time to Adult Leader Training and more recently as Chief Commissioner and Chair: Adult Support. Andrew has made substantial progress over the recent years with regards to the implementation of our Strategic Plan and growing the Adult Support portfolio including the revision and development of adult resources. Andrew is a semi-retired professional civil engineer who was a director of, and specialist consultant to, a leading South African consulting practice. He has specialised in integrated water resource planning for shared river basins and leading multidisciplinary feasibility studies for large water infrastructure projects. Read Andrew’s Scouting journey here. 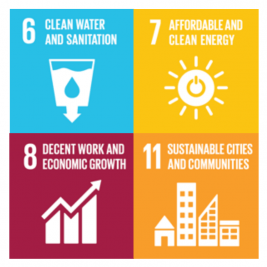