From the 20th to the 23rd of March hundreds of teens rallied together at the Sandvlei Sea Scout base to compete in the Cape Kontiki 2014. 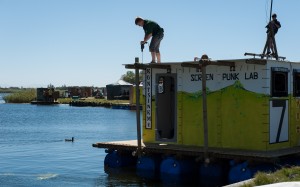 This year’s Cape Kontiki stepped up the challenge and turned the Sea Scout Base into a “Laboratory” of adventure and excitement. The competition started on Thursday and so the challenge this year included spending two nights on the raft, a parent potjie competition with the camp fire on the Saturday evening. The Fringe activities included pioneering and racing activities and were enjoyed by all!

For the third time running 1st Bergvliet Sea Scouts took the rafting winner’s trophy and added the 2014 Fringe competition to their long list of victories. Group Scouter Adrian Velaers was very proud of all the Scouts present “The competition was tough with some very strong other teams. We won by a narrow margin of 3 points out of 759! I am very pleased by the determination, leadership, teamwork and general competence of all of our scouts! Let’s keep it up!”

Another special feature this year was the Rover raft. The Rovers decided to embrace the opportunities they too receive as being part of the Scouting Movement and joined in the fun. Even though they did not compete for a prize, they joined had a great time! Who knows, maybe next year there will be more Rover rafts?

The Cape Kon-Tiki Adventure was started at Sandvlei in 1978 by Darryl McEwan. Originally it was purely a raft competition whereby teens had to live on the raft for 24 hours. Today the competition has grown exponentially and with the addition of the Kon-Tiki Fringe even the crews on land get to exert their „competitive spirit‟!