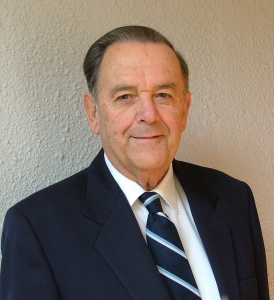 “Try to leave this world a little better than you found it”, said Baden-Powell. Garnet was a man who has actively done his best throughout his life to empower and support generations of young South Africans within the Scouting Movement.

Despite his on-going battle with cancer, Garnet still actively participated in the running, reform and development of our Scouting Movement. He was not only our chairman, Board member, but also our advisor and friend. With his wisdom, humour and wit it was always a pleasure to be in his company and he was instrumental in safeguarding our values and principles as he knows Baden-Powell’s teachings like no other.

Garnet has been a key player within the Scout Movement on a national and international level for decades. He has shown global leaders that South Africans are people with integrity, courage, tolerance, respect, determination and heart. Before the age of 16, he received the King’s Scout badge. In 1976 he played a key role in uniting the four Scout Movements into one unified non-racial entity, despite the political regime of segregation. In 1977 he was elected Provincial Commissioner for the Western Cape. In 1985 he became the Chief Scout of South Africa.

As a Scout, a leader, a trainer and chairman he has inspired, taught and supported generations of South Africans that have made good citizenship, duty to God, duty to others and duty to country a way of life. As a member of the task force that drafted the WOSM publication “What is Scouting”, he redefined and updated Baden Powell’s fundamental values and principles that guide over 32 million children and youths in over 161 countries worldwide today. For his services to Scouting – amongst others – he was awarded the Order of the Silver Springbok in South Africa, The Silver Wolf from the Swedish Scout Association in recognition of his service to International Scouting and the Bronze Wolf from WOSM in recognition of his service to World Scouting. These awards are only given to people that have provided a lifetime of selfless and voluntary service to the upliftment and service of youth and country.

Last year Garnet was awarded the prestigious Presidential Order of the Baobab for his work he did in Scouting.

Additional to his service to Scouting, Garnet was a successful entrepreneur, a long time Methodist Lay Preacher and served in various management roles within the Methodist Church as well as the Scripture Union of South Africa.

Garnet was an inspiration to those who knew him and to many young people throughout the Movement who in turn are doing their best to inspire and empower others and his legacy will live on.

Our prayers are with Virginia, Clinton, Lee-Ann, Julian, Lisa and his grandchildren.

Funeral arrangements are not yet known, but we will inform you as soon as it is available.