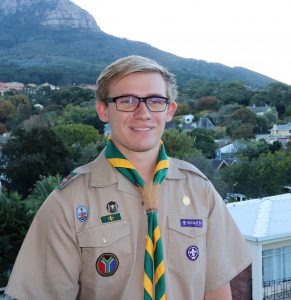 Earlier this year Lawrence Stanton was appointed as the new National Young Leaders Representative. Lawrence hails from Johannesburg and joined the Scouting Movement in 2003 at the 1st St Peter’s Cub Pack which was being run on his school grounds. “The Scout Group was very small and in 2005 the Pack had to merge and my friends and I were introduced to the 1st Rivertrail Scout Group with Marion Halstead as its Akela,” explains Lawrence. “It was only a matter of time before I joined the Scouting Movement. You can only see the other kids having fun with the Cubs for so long, until you’re tempted in! But once I was in there my interest in outdoor skills and methods grew. So much so that I was still learning new things every Friday and at camp until I went up to Scouts.” After obtaining his Leaping Wolf and then becoming a Scout, Lawrence spent 5 years as Patrol Leader, then 1 Year as Troop Leader. In the meantime he also served 3 years as Chairman of the Court of Honour. “As for my time with the Scouts themselves… How do I put it – it’s just so much better when you do things bigger. I had also found a good bunch of friends and Scouts became as much a friendship as it is a brotherhood, and was simply a way of life at that point.” 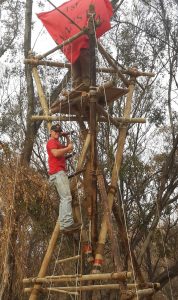 So which Scouting memories make Lawrence smile? “There are simply too many to recall. But probably the most significant memories were the ones where we were out there and simply had no idea what was happening. From a link badge camp and learning how to make a shelter from Rik the old Troop Scouter, to my first Scout camp – a backwoodsman camp towards Krugersdorp precisely 1 day after my investiture – where we got so drenched with the Highveld thunderstorms that we were finding crabs and other creatures in the ruins of that same shelter. I also have fond memories of building a pioneering tower 6m in the air where you need to tie that lashing perfectly or else the whole thing falls down. And finally, hiking through the night on the Fanie Botha trail in 2014, looking for a hut that had moved 1km down the hill from when my outdated map was printed! I think these memories stand out for me because you only learn something when the absence of that knowledge is highlighted bright and clear. On all these occasions we learnt something, and so every time I used that knowledge later on, I remembered those days, which lead to them becoming good memories.” 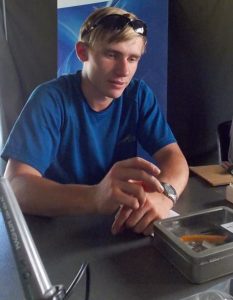 He currently lives in the Western Cape and is studying towards his Bachelor of Science in Engineering in Mechatronics at the University of Cape Town. “I’m currently in my third year. Mechatronics is a multidisciplinary degree involving a strong foundation in electrical engineering, as well as mechanical engineering. By using the power of modern computational and sensory techniques, we can solve problems and applications that were previously impossible using a purely mechanical approach. Typically, we use this unique cross-discipline advantage to make complex machines and systems for highly automated and high-performance applications such as automotive assembly lines and autonomous machines. I really enjoy mechatronics because I find that most of the problems that I think are important and that interest me, involve solutions that mechatronics can provide.”

After moving down from Johannesburg Lawrence decided to give back to others what he had gained through Scouting. “My SGL Robin Ellis grew up in Cape Town and came down to show me and my fellow Rivertrail Scout Harry Joannou around the Western Cape Scouting scene. He had met 6th Rondebosch Troop Scouter John Fraser while on the Jamboree in Japan. John had been grinding as a solo Scouter with zero ATS’s. So we decided to join John’s adult leader team as Assistant Troop Scouters. In doing so, I get to give back some of what I was given. Being from Jo’burg I now also get to discover a lot of things here that I didn’t know! There is always something new to do or to find out. As an adult volunteer I’ve also staffed on the Raynor competition by Koeberg. That was the first time in years that I was out there and really didn’t know what was cracking. All this running down the beach, and then, yeah, a base, ok, then… it was a real adventure and it filled that nostalgia craving from my days as a young Scout!”

When he is not studying or Scouting he can be found on a basketball court. “I am a keen basketball player! I have played for my school’s 1st team and the UCT 1st team, as well as a few club sides along the way. At UCT we remained Western Cape champions and ranked 4th in the 2018 USSA (University Sports South Africa) tournament at Wits. Otherwise I also race sail boats in Simon’s Town on Wednesdays.” Lawrence is also no stranger to obtaining awards off the basketball court, he is a Springbok Award recipient and also managed to complete the Gold President’s Award in 2015.

Despite his busy lifestyle Lawrence has now taken on a national role in Scouting too. “Many will attest that if you manage your time and prioritize what’s important over what may be easy or distracting; you can do amazing things in just a single day. And it’s not as if you have no time, how many hours a day do you spend watching TV or something else unproductive? Now compare that to the amount of time you actually work or study. Somehow, we can already get most things done in a surprisingly short amount of time, so what’s the harm in allocating a bit more of your day to Scouts? Being appointed the new National Chair: Young Leaders Representative for SSA is a huge privilege and a challenge. I am fortunate to now engage in some of the decisions and discussions in the Manco, but I also have a lot of work to do. I aim to establish a Regional Young Leader’s Representative in every Region, and provide a channel of communication for the Young Leaders’ of Scouts. I want to draft and implement a Young Leaders’ Involvement Policy to meet the objectives and outcomes and I want to understand why Scouts leave at age 18 and charter a plan to amend this and promote greater retention of Scouts into Adult Leadership and Rovers.” 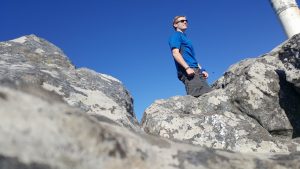 Lawrence’s message to our youth and young leaders is clear “Nobody knows Scouting better than you do. You, the young leaders of Scouts, have the most recent account of what it takes, and what Scouting is really about. Make your voice heard, be curious, and be involved. There is always another adventure waiting for you here in Scouting!”