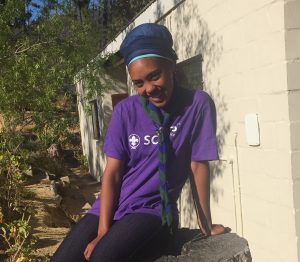 21 year old Badronesa Solomons started her Scouting journey as an intern with the Western Cape Scouting in Schools Programme (SIS) . What she didn’t know at that time was that her journey would not end after a year. What she also didn’t know was that her journey would lead her to many adventures – one of the biggest being a job as camp staff in the United States of America! 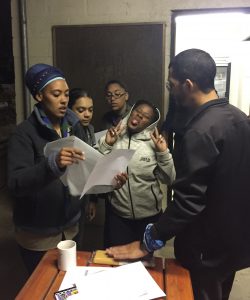 When she became a part of the Scouting Movement Badronesa didn’t really know what Scouting was about. “I quickly realised that Scouting is more than knotting and pitching tents. It’s all about the adventure of getting to learn new things in different ways instead of just sitting in one place.  I was very much to myself and introverted when I started. Being part of this programme made me become an extrovert. It made me talk to people that I never actually thought would be possible. I think, that is Scouts! It puts you out there. You have to make connections, you have to make contact. You are growing in ways, that isn’t explainable. You go through challenges and situations and you learn to push yourself through and just carry on and do what you’re supposed to. For example, in October 2018 we had a Cub Fun Day.  I had just established a new Scout Group in Zerilda Park when Ahmad Solomon, the SIS coordinator, called to ask me to sign up ten Cubs for the Cub Fun Day. I told him I would not able to get all ten kids but he insisted that I needed to have representation of Zerilda Park. After the call I cried because I really thought I couldn’t do it. But I got everything together and I had a 90% attendance. It taught me that sometimes you just need to do, what you’ve got to do, and it will work and you will be proud. In the end, it was a really great experience for me!” Situations like that encouraged Badronesa to stay in the Scouting Movement and made Scouting play a big role in her life. “Scouting has become my second half”, she says with a smile. “I do have other interests but I’m more focused on Scouting in Schools because I want to make a difference. I know that these kids are going through so much and through Scouting I can be their change. Last year, some of my kids in Zerilda Park would be staying behind after the meeting and ask for extra work they can do at home because they have nothing to do at home. There are no friends, they can’t play outside because of the circumstances like shooting and all sort of things. It just makes you want to make a difference.”

After her year as an intern Badronesa was given the opportunity to work as a staff member at a youth camp in the United States of America. “I am so excited about going. All the Scouting skills I learned here will help me a lot in America. I don’t know how things will work in there, but I’m prepared South-African wise… I know how we run camps and what we need and I am going there to learn more and to grow.” 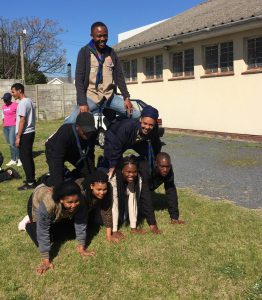 Badronesa is not sure what she wants to do when she comes back from America, but there is one thing that she is sure about “I want to continue to be involved in volunteering for SCOUTS SA. I want to become a Pack Scouter and help in the Scouting in Schools Programme. Scout volunteers know how to make a difference, how to work hard for that and how to be strong. To all the Scouting leaders I just want to say that you are here to make a difference so always be prepared. For anything,.. just be prepared.”