In the early days, boys formed their own Scout Patrols and asked a man they knew if he would be their Scoutmaster.  Many of these men probably knew nothing of the outdoors and adventure, having been brought up in decorous Victorian and Edwardian drawing rooms where young people were seen and not heard.  These men learned Scouting the same way as the boys who co-opted them did – by reading the fortnightly magazine “Scouting for Boys” which had started this new “craze” amongst the youth of Britain, the empire and a few other countries.

B-P was busy organising the bringing together of these scattered Patrols as a true Movement, as well as helping his sister Agnes to start the Girl Guides from the few pioneering and determined girl Scout Patrols (1910) followed by the Brownies (1914) and the Wolf Cubs (1916).  There was no formal training available for these new leaders and each did their own “thing”.

Then in 1914 along came the Great War in which the Scouts and Guides voluntarily performed sterling service in place of those who had been called up for military service.  This call-up, of course, included many Scoutmasters and older Scouts – in fact, the Cornwell Medal for gallantry was named after 16 year old Jack Cornwell who made the supreme sacrifice at the naval Battle of Jutland in 1916.

The war lasted for more than four years, but B-P had continued to devise plans and less than a year after the armistice he put these into practice by holding the first ever Wood Badge course at Gilwell Park in Essex.  This was held from the 8th to the 19th of September 1919, barely a decade after the official start of Scouts and only a couple of years after Cubs started. He used exactly the same principle as was so successful with the boys – learning by doing and working in small peer-led groups. The trainees were divided into Patrols, exactly as in the larger Scout Troops, each with its Patrol Leader and Patrol Second – over the course of the twelve days everyone had the opportunity to take on one of these roles.  In all but age these men were boy Scouts; although there were a few formal sessions, most of their activities centered on such things as camp craft, pioneering, stalking, tracking and life in the outdoors. They played, and no doubt thoroughly enjoyed, typical Scout games, they pitched tents and slept in them, they held campfires; they climbed trees, played wide games and took part in many activities. They learnt much about nature which must have come as an enormous surprise to those who dwelt in inner cities.  In short, they became Scouts.

In no way was the course an exam, rather it was a learning curve.  B-P wanted to give all successful participants some form of recognition. His great imagination hit on just the right thing – he had been given the massive necklace worn by the conquered Chief Dinizulu;  this was made up of hundreds of carved wooden ‘beads’ of various sizes, threaded on to a strip of cowhide*. Each participant was awarded two of these beads, threaded on to a leather thong to be worn around the neck when in Scout uniform. Of course, in only a few years the original beads ran out and ever since then replicas have been awarded to successful participants.  It is the most treasured badge any Scouting member can achieve.

Back then it was unheard of for places of employment to offer any form of self-improvement. The better positions were purchased by well-to-do families and just very occasionally an ambitious lowly employee might “climb the ladder”, but mostly it was a case of once a worker, always a worker and many a talented man went to his grave without having progressed very much further than office boy or general dogsbody. In those days most children left school at 12 with good grounding in the three R’s – reading, writing and ‘rithmetic – and scripture and nothing else. Lucky indeed was the lad who stayed on until 14.  One can only imagine the astonishment of that day’s employer on learning what leadership qualities his (possibly) lowly employee had exhibited or acquired as a result of attending the new course. The boy Scouts had yet again led the way.

The success of the first course was immediately evident and it was soon to be followed by others. But not everybody could get to Gilwell. At that time travel within Britain was not easy and was very time consuming, so very soon Wood Badge courses were offered by each British county and in various venues as well as in overseas countries. Each followed the pattern set by Gilwell.  But wherever it took place, the successful participants became proud members of the 1st Gilwell Park Scout Group in England.

Having established the success of the training for Scout leaders, it wasn’t very long before suitably adapted courses were held for Cub leaders.

Although the actual content of the course was changed over the years due to changes in society, it remains largely as it started off. It continues to be held in high regard by employers, who realise that someone who has voluntarily undergone such training is worth giving a second look at. Nowadays people go on corporate training because it costs them nothing, maybe it’s a ‘jol’.  But we Scouters CHOOSE to go on Wood Badge, usually at our own expense, spend several months on achieving it and, dare I say it, come out better people because of it – and all in the pursuit of service to others as opposed to a slight possibility of a salary increase for corporate training.

I was very pleasantly surprised a few weeks after my arrival in South Africa in 1971 to learn that, along with a number of other companies, my employer gave us two weeks leave over and above the allocated annual leave for an employee to run or assist at a Scout camp and would also allow early Friday departure to prepare for any Scout training courses. Now, doesn’t that tell you something?  I also learnt that back in the days of conscription, a recruit who had been a Scout was automatically put on to the list for possible officers – too young to yet have a Wood Badge, AND in an Afrikaans-dominated service.

*An authentic replica of Dinizulu’s necklace is (was) on display in the Johannesburg Museum. 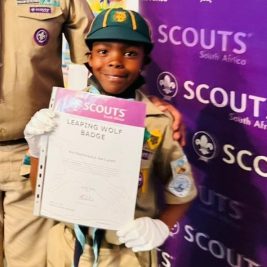