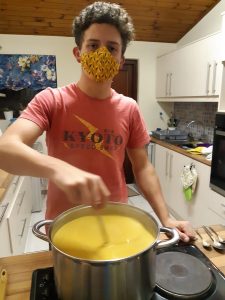 15 year old Ethan Stopforth is a Patrol Leader with 1st Blaauwberg Scouts in the Western Cape. He recently stepped up and encouraged his Scout Group to participate in a 5 week community feeding project. “I think at the beginning of the original three weeks of lockdown we all expected to be let off”, explains Ethan. “After the continued extensions I believe we all became a little annoyed and upset about the strict regulations and not being able to see anyone. However, after realising that a large sector of our community had lost jobs and are now unable to support themselves and their family with basic needs such as food, I became motivated to help out those around me as much as possible. 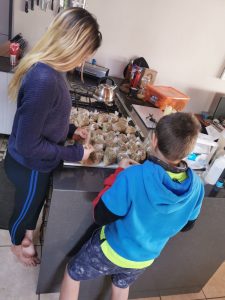 My Patrol had been hosting Patrol-In-Councils over video call every two weeks or so. My parents and I had heard about this local feeding project on social media. I decided to get our whole Troop involved and so discussed our participation and explained how this was an opportunity to be a part of a meaningful project during lockdown, as well as to contribute to our advancements. Soon a total of 23 Cubs and Scouts from 1st Blaauwberg were on board. I got in contact with the people heading up the initiative and organised with them to drop off our Group’s contributions over the 5 weeks of collections.

We made peanut butter and jam sandwiches as well as dry soup packets for our fellow community members left without food or a source of income during this time. A total of 114 loaves of bread made into approximately 969 sandwiches, and 748 soup packets (each packet feeding a family of 4) which altogether made 2992 meals. The food aid was then delivered to people working within the community, who in turn distributed it to those in need. It felt good to be able to help. I think everyone was happy to be a part of it and we felt that we were helping out a worthy cause in our local community. This was an eye-opener for me.”

You get a sense of belonging and safety by being part of a Troop that has your back and respects you.

Ethan lives and breathes Scouting since he joined the Movement at the age of 7 as a Cub in Johannesburg. When he was 9 years old his family moved to Cape Town where he swiftly continued Scouting. “For a long time now Scouting has been my Friday nights and weekends, all of which I look forward to,” continues Ethan. “I believe Scouting is such a great organisation because it teaches us to work as a family and as a team. You get a sense of belonging and safety by being part of a Troop that has your back and respects you. I also believe Scouting prepares us for real life by forcing us to work well under pressure and accept and work with all kinds of different people. We also learn important physical skills and have a ton of fun while we’re at it!

I have been a Patrol Leader for about 3 years now and the one thing I was always told by my parents and Troop Scouter was to lead by example. I expect my Patrol to behave in a civilized and respectful way, and they expect me to set that example for them. I also value fun and having a good time at Scouts, but never at the expense of someone or against the rules and laws.” 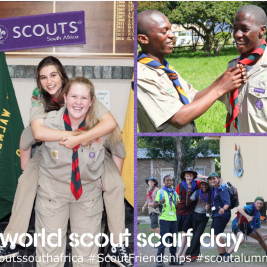