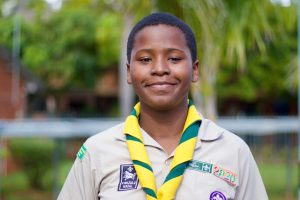 “I joined Scouting at the age of 11 as I was interested in what they do, how they care for the environment and the people around it”, she says with a smile.  “Since I joined I have made so many memories! One of my favourite ones is from when I attended my first Troop sleepover. The Scouts went on a 10km day hike and went swimming afterwards. We made an open fire and cooked our own food. We even used logs to build our own shelter”, she giggles.  “I’ve learned so many new skills, which include First Aid, Pioneering, Children’s Rights, Discipline and Environmental Awareness!

Scouting has also helped me with my school work. Scouts from 1st Grantham Park ran a water audit project for the school as their annual community service project for Star Patrols. This project aims to help the school towards saving water. All taps around the school are monitored by Scouts so we can quickly report any leaking taps. A log/form is used to report the matter”, she explains.

“Being a Scout helped me learn how to focus so I can excel in many activities, including sports and in the classroom. During Term 2 I received my Provincial Colours for U13 Netball. I was also part of the Grade Top 10 and Grade Top 5 in Mathematics.”

When asked about the benefits of keeping the Scout Promise & Law, she said: “The Promise and Law are most important to keep as a Scout. They helped me understand the concept of Scouts, and later on also helped me to understand the world I live in. I would advise my peers to be prepared at all times and believe in what they do. Focus on one thing you really want to achieve”, she concludes.