The voice of 1st Malvern Group Scout Leader, Guy Caws is known to many across the eThekwini area of Durban. As the Senior Education Officer for Durban Solid Waste, Guy can often be heard on Durban-based community radio stations.

During these radio interviews he seizes the opportunity to elaborate on his passion for the environment and his love for Scouting,  Guy provides the communities in the area with information and innovative local environmental ideas. He also talks about his Scouting adventures and the impact Scouting has on youth.

During a recent radio interview, Guy took along two Cubs from Shallcross Cub Pack. Both Cubs had an amazing time talking on the radio about their community  and conservation activities. They spoke about how they planted Coral trees at the Shallcross library, how they have cleaned up local areas and how they built conservation stoves. Their Akela, Bindu Singh was also interviewed.

“Talking about our Scouting projects over the radio was so cool,” said Shellcross Cub Gia Gounden. ”So many of my friends and family heard me and it was good for them to know what we do for our local environment.”

“It’s amazing how much positive feedback I get from people who phone in wanting to know more about Scouting in their communities,” said Guy. “I also try and get my Scouts to talk about the difference they make as Scouts in their environment,” he said proudly.

“Being featured in local newspapers or on local radio stations has enormous potential to raise the public profile of Scouting,“ said Steve Camp, KZN Regional Commissioner. “The wonderful work being done by Guy on his radio talk shows, project a positive and high profile image of Scouting in Durban. His interactive shows ‘educate’ local community members and change their perception of the movement positively. Once you start to raise the Scouting profile, you are in a better position to recruit new members, adults, raise funds and generally gain more support from the community,” said Steve. 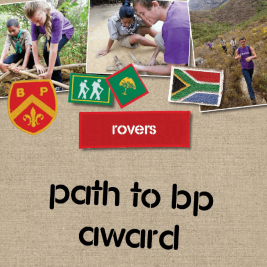